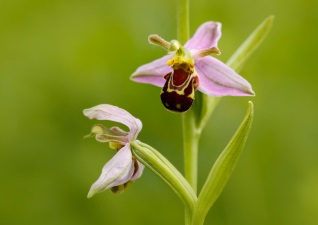 What is chalk grassland?

Chalk grassland is a unique, specialised and fragile habitat, important for landscape and historical value as well as for wildlife.

Lime-rich, but low in nutrients, the thin soil holds little water and heats up quickly. These stressed conditions stop the dominant lush grasses from taking over. This allows a diverse range of smaller herbs and lower growing plants to flourish.

Lowland chalk grassland is mainly confined to the North and South Downs, from Kent to Wiltshire and Dorset. A variety of sites are found in Surrey and south London.

Why is it important and how do we look after chalk grassland?

Chalk grassland is exceptionally rich in plants and insects and up to fifty different types of plants and wildflowers can be found in one square metre, many of them rare species.

Chalk grassland was originally created by the clearance of trees and scrub about 9,000 years ago and maintained by grazing livestock. There has been a sharp decline in the amount of chalk grassland in the last fifty years, with one of the biggest threats being lack of grazing. Sites must be managed to maintain their quality and to stop coarse grasses, scrub and trees from taking over and shading out the diverse range of plants and flowers. If managed correctly, no single species of plant can dominate and this creates a very diverse habitat - one of the richest in western Europe.

Grazing by sheep, goats or cattle is the best form of management and the type of animal used depends on the site. Goats are good at reducing areas of scrub, whereas sheep and cattle are good for maintaining the grass.

What you can see here

Find a patch of meadow to sit down and even if you don't know the varieties, you'll find many different wildflowers to discover around you.

The best sites to see chalk grassland in Surrey

You'll also be rewarded with great views towards the South Downs and the Weald:

Find out more about the management of chalk grassland on our Downlands Partnership web page. There are many opportunities to volunteer to help.