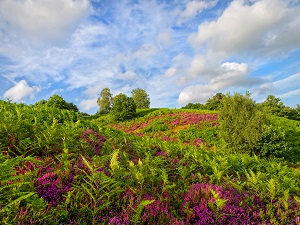 Heathland is the name given to wide open landscapes dominated by low-growing shrubs, such as gorse, heather and the heathland grasses that give it its name. Heathland has only a few trees and no herbaceous plants.

There are two main areas of heathland in Surrey and these are the Thames Basin Heaths mainly located in the north west of the county and the Wealden Greensand in the south west and centre.

Why is heathland important and how do we look after it

Traditionally, heathland was used by local people as part of their everyday lives. They grazed their animals, cut firewood, collected gorse and turf for fuel and cut heather for thatching. The right to do this was known as commoners' rights. Here, as in other parts of the country, large areas of heathland were lost to development in the late nineteenth and early twentieth centuries. Heaths were considered to be wastelands, roads were built across them and towns such as Woking expanded over them.

Today, apart from military training, heaths are mostly used for recreation but they still have an important role to play. With wild looking landscapes and distinct wildlife, heathland adds great variety to Surrey. Film crews are often attracted to Surrey's open heathland landscapes. By managing heaths through clearing scrub and bringing back grazing, we can keep areas open for people to enjoy and maintain links to our past.

The best sites to visit for heathland in Surrey

Many of our Countryside Estate sites are large areas of open heaths with a real 'get away from it all' feeling.

Heathland sites are generally situated along the western border of Surrey from north to south:

Our Surrey Heathland Partnership has been looking after heathland for the last thirty years. Find out more and look out for volunteering tasks that you can join in with.

The Thames Basin Heaths Partnership protects large areas in Surrey, Hampshire and Berkshire and there is a lot of information on their website, including ideas for self-guided walks. They often run informative and educational events.

From late summer into September, we are treated to an annual display of purple covering heathland as the various types of heather bloom. During the winter and spring months, vivid yellow gorse brightens the landscape.

Surrey's heathlands are home to locally rare species such as the silver-studded blue butterfly and the nightjar (ground-nesting bird) as well as the nationally rare sand lizard and woodlarks.

Our lowland heathland is extremely important for invertebrates, especially insects and spiders. Surrey is the richest county in Britain for ants, bees and wasps with dozens of rare species recorded.

The majority of heathland sites are designated as Sites of Special Scientific Interest (SSSIs) due to the rare species of fauna or flora to be found. Heathland is a very precious habitat indeed!

Danger of fire on heathland

Uncontrolled fires during the summer months, often caused by arsonists or carelessness, can cause long-term damage to heathland and its wildlife. Heath fires burn much hotter during the summer and large areas can be damaged very quickly with the wildlife living there unable to escape.

So please take extra care when visiting Surrey's heathlands, never light a barbecue or leave a smouldering cigarette on the ground.

We work closely with colleagues in Surrey Fire & Rescue service, find out more about wildfires on their webpages. We also post information about Surrey wildfires when they occur on our social media channels, so please follow us if you can.