The history of Guildford's High Street 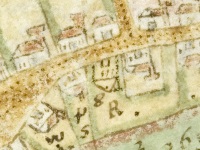 With its cobbled street, historic buildings and famous Guildhall clock, Guildford has one of the most attractive high streets in the country. Nowadays it provides a varied selection of independent shops, major stores, restaurants and bars for locals and tourists alike. Closed to through-traffic during the day, it also provides a community space for craft and food fairs, buskers and sporting events such as the Guildford half marathon and cycling races.

The historical development of the High Street can be traced using some of the many resources held at Surrey History Centre, including prints, photographs, street directories and maps. The earliest depiction we hold is from a volume in the Godwin Austen family collection which contains maps of property and land owned by the Austen family (SHC ref G111/2/3). The High Street is shown here in a detail of a map (p.14) of the manor of Shalford Rectory, commissioned by George Austen (d.1621). This shows St Mary's Church (on the left) on Quarry Street and the high street lined with buildings and some of the small passages between the buildings leading into fields on either side. The map is annotated with notes on plot sizes and field names.

Another plan (SHC ref M/62) entitled 'The Ichnography or ground plan of Guldeford (sic), the county town of Surrey' dates from 1739, so just over 100 years later. It was surveyed by Matthew Richardson and engraved by John Harris, and shows in detail the individual buildings, alleys, roads and fields that formed the heart of the town. The plan was dedicated to the Earl of Onslow and features the family coat of arms at the top right corner. 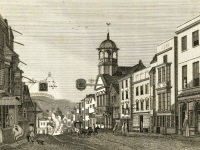 Just a year earlier in 1738 John Harris had also produced a magnificent prospect of Guildford from the south-west which showed in great detail the buildings along the High Street, including Abbot's Hospital and Holy Trinity Church. See our December 2018 Marvel of the Month: The South West Prospect of Guildford in the county of Surrey.

A closer view can be seen in an engraving (SHC ref PX/72/417) taken from a watercolour painting by Thomas Russell (1748-1822) in the collection of Guildford Museum. It is dated c.1778 and shows clearly the varied architecture of the buildings which is still such a feature of the modern street. On the right the Guildhall with its famous clock (1683) dominates the scene, whilst the mix of shops, inns and private residences shows the importance of the market town as a busy centre of trade and travel.

By the mid-nineteenth century, the commercial life of the High Street can be traced in trade directories and almanacs, many published by local printers. An early example is taken from Pigot's Directory of 1823-24 and lists just some of the many different professions and trades who had shops and offices in the High Street, including attorneys, bakers, cabinet makers, druggists, ironmongers and milliners. In these early directories the premises were rarely numbered so locating them exactly can be difficult but the individuals' names can be cross-referenced with the censuses of 1841-1911 (available on Ancestry) where the census 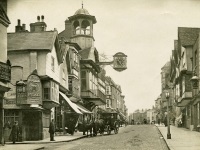 enumerators listed house names and numbers. Another useful resource is the Guildford Holy Trinity and St Mary tithe map of 1849 which shows the individual land holdings along the High Street and lists the land owners and occupiers in the accompanying apportionment book (SHC ref 864/1/73). The High Street was re-numbered by Guildford Borough Council in 1961, and a guide to the changes is available in our library collection (658.87p). 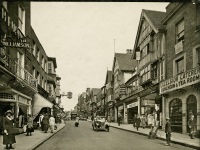 The invention of photography in the mid nineteenth century brought a transformation in the visual recording of Surrey's towns and villages, and the High Street is particularly well served providing a wealth of information for local historians. Surrey History Centre holds large collections of photographs and postcards, including these Frith photographs (SHC ref PH/72/BOX4/148 and PH/72/BOX4/152) of 1903 and 1923 which show changes in fashion and transport as well as in the development of retail outlets and the arrival on the High Street of cinema in the form of the Picture Playhouse.

Finally, a print (SHC ref PX/72/1020) made in the 1970s highlights the architectural features of the buildings on the west side of the High Street but also supplies a snapshot of the commercial ownership of the premises at that time. It was created by Boleslaw 'Boris' Fijalkowski (1924-2015), a Polish architect and artist who made Guildford his home in 1960 after studying at the 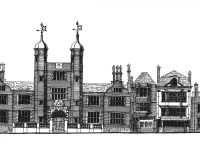 Polish School of Architecture, part of the University of London. As a teenage boy in 1940, Fijalkowski had been captured in Lvov in Poland by the Russians and under terrible conditions was transported to a camp in Bukon in Kazakhstan, western Siberia. In 1942 he escaped and made the perilous journey to Teheran where he joined the Free Polish Army which then linked up with the British Eighth Army and fought through Italy, including at the battle of Monte Cassino.

Fijalkowski served on The Guildford Society's committee for many years and contributed drawings and paintings to its newsletters and books, including illustrations for Russell Chamberlin's book, 'Guildford, town under siege', in 1987 and for 'Nature and Tradition', a study of Guildford's Arts and Crafts buildings, published in 1993. In 2004, the society published 'Glimpses of Guildford', a book featuring Fijalkowski's drawings and paintings. Copies of all these publications are available in our library.

Further detailed studies of many of the High Street buildings can be found in published articles by the Surrey Archaeological Society and Guildford Museum which are available in our Local Studies Library and are listed on the Surrey Libraries catalogue.