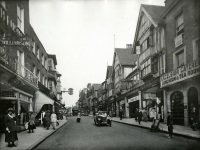 If you browse the internet, you will discover numerous examples of fine vintage furniture available for sale that was once produced by the Guildford firm of William Williamson and Sons, of which Surrey History Centre holds a large number of records, including ledgers, scrapbooks, illustrations and other materials.

The company's long tradition of providing apprenticeships in cabinet making and upholstery and its importance in the success of the business, is also reflected in the archive. A major employer in the town, the number of craftsmen employed by the company numbered at least 48 in 1907. 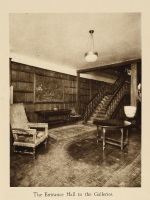 First in Chapel Street, then known as Black Horse Lane in the early part of the 18th century, records show that the company originally traded in textile fabrics, especially silks, velvets and other fine materials throughout the country. Russell's 1839 Guildford Almanac lists the company as upholsterers, brokers and appraisers, occupying nos. 13, 14 and 16 Chapel Street, and, by 1846, it also had premises at 13 Quarry Street. Growth led the firm to relocate to 44-45 High Street in 1847, now the House of Fraser store. In the new store, W Williamson and Sons sold furniture in 39 separate galleries with a floor space extending over 40,000 square feet. In 1929 the firm's advertisements stated that antiques were 'displayed in Periods and Uncrowded'. 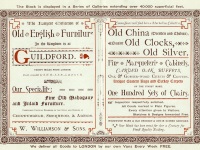 Advertisements also included the slogan 'the largest, most varied and remarkable collections of fine old English furniture in the Kingdom', repeated on the firm's printed trade cards and headed paper. In addition to the different types of furniture on display, which included vintage French and Italian pieces, its emporium sold antique clocks and fine china, silverware and soft furnishings, such as oriental rugs and even Turkish carpets.

Such was its renown as purveyors of high quality furniture and articles de vertu that, on 12 January 1889, W Williamson and Sons received a Royal Appointment as upholsterers and decorators to Queen Victoria, for whom it carried out the upholstery and drapery for the Grand Corridor at Windsor Castle. On 9 September 1901 the firm received a warrant from Queen Alexandra for its service as silk mercers. In the 1920s and 1930s, Queen Mary was also among its regular customers. The material found in the Williamson & Sons scrapbooks show that the company took great pride in supplying furniture to the Royal household. 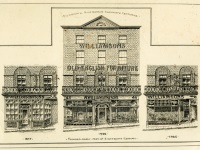 Aside from the retail side of the business, the records show that the firm also offered furniture removal and storage, with its accounts recording the warehouse facilities and transportation available, as well as details of stock held and repair work carried out. It also acted as paper hangers, estate agents, house furnishers on hire, licensed appraisers and valuers for transfer and probate. As dealers in antique furniture, W Williamson and Sons' name is also to be found in the records of White & Sons, auctioneers and valuers of Dorking, for which we hold an extensive collection of records. 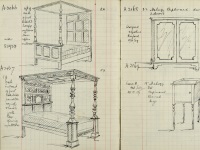 The records also comprise a series of insurance valuation books which give detailed inventories of the contents of several large properties in the county, including West Horsley Towers and Munstead Place, Godalming.

In 1944, the firm moved to Castle House, 49 Quarry Street, and, by the 1950s, were no longer owned by the Williamson family. In 1960 W. Williamson and Sons permanently closed, ending a long tradition of cabinet making and upholstery in Guildford but their legacy continues in the fine antique furniture they once produced.