The South West Prospect of Guildford in the county of Surrey 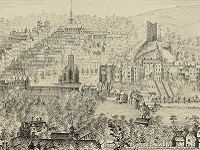 We are fortunate to hold two versions of this stunning panorama in our collection, one drawn and engraved by the brothers, Samuel and Nathaniel Buck, the other engraved by John Harris.

The smaller version shown in the main illustration was drawn and engraved by the Buck brothers and was published 'according to Act of Parliament' in 1738. It shows Guildford from the south west, and you can clearly see the castle, the town churches, the Friary, the River Wey and its water meadows, and the High Street leading up to Abbot's Hospital at the top. To the left are wooded hills and, beyond these, Sutton Place and Stoke Church, to the right are the Pewley downs and chalk quarries and along the lower half are houses, warehouses and the mills on the river. At the bottom of the print is a history of the town and a numbered key to specific points of interest.

Samuel and Nathaniel Buck came from Yorkshire, possibly Richmond or nearby Hauxwell. Samuel was born in 1696 and, by 1719, was known to the Leeds antiquary Ralph Thoresby as an accomplished amateur artist. Thoresby introduced Samuel to John Warburton who was working on a county topography of Yorkshire and this seems to have sparked Samuel's interest in sites of historic interest. However his first project was a series of large prospects of northern towns, including Leeds, Wakefield, York, Durham and Sunderland. By 1724 he was living in London and was acquainted with several members of the Society of Antiquaries, including its secretary William Stukeley. In 1724 and 1725 he accompanied Stukeley on several tours around the country visiting sites of historical interest and making sketches of these 'remarkable ruins' and 'mangled remains'.

With the continued support of the Society and now aided in what had become a successful business by his brother Nathaniel, he continued touring the country drawing and producing illustrations. Between 1727 and 1742 the Bucks travelled the northern counties, the Midlands and southern England, completing their county-wide survey in Wales. These antiquarian projects were only part of their business and, from 1728, the brothers also worked on producing and publishing a series of long prospects of English and Welsh cities and towns, one of the earliest being Guildford. They generally chose an elevated viewpoint from which to draw so as to include other reference points in the panoramas as well as featuring many specific town buildings.

The brothers asserted that they drew the views on the spot and engraved their own copper plates but it is known that they employed other artists and engravers, including, amongst others, Hubert-Francois Gravelot, Peter Monamy and engravers John Harris and Gerard Vandergucht. The artistic style of the prints varies and the brothers' own work is considered less sophisticated than others in the series. 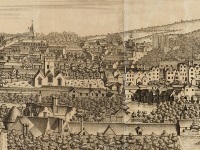 The second version of the print in our collection, shown here in part, was published in the same year, 1738, with the same title. This version is much larger, produced from two copper plates (see illustration) and the text, also a history of the town, is different from the Bucks' print and includes more details on the Onslow family. At the bottom centre of the print is a decorated cartouche with a dedication to the Rt. Hon. Arthur Onslow Esq, Speaker of the House of Commons. John Harris is named as the artist and engraver. The panorama covers much the same area and viewpoint as the Bucks' version but the scene is reproduced with greater detail and is stylistically different, giving a more realistic topography. In addition it features ten larger scale views of specific buildings including the churches, Abbot's Hospital, the castle, the friary and two gentlemen's residences at either side.

It is known that John Harris worked with the Bucks and it seems unlikely that he would have produced a panorama in the same year and with the same title entirely independently. It is certainly possible that he came into possession of the Buck drawings or worked alongside them either at the drawing or engraving stages of their panorama. At around the same time Harris was commissioned by Lord Onslow to produce 'The Ichnography or ground plan of Guldeford, the county town of Surrey', which was published by Matthew Richardson of Guildford in 1739. It is possible that Harris showed the Buck print or drawings to Lord Onslow and that he commissioned Harris to produce a larger version whilst engaged by him on the Ichnography. 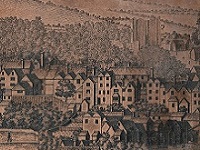 After the death of Nathaniel in 1773, Samuel diversified into teaching drawing and painting, and exhibited at the Royal Academy. The copper plates of the antiquities series and town prospects were sold to Fleet Street printmaker and cartographer Robert Sayer. Sayer reissued the prints in 1774 in the three volume Buck's Antiquities, which remained in print until 1813. John Harris's copper plates of the South West prospect and the Ichnography of Guildford are recorded in The history of Guildford (J.&S. Russell, 1801) as having been given to the Corporation of Guildford by Arthur Onslow in 1766. They came to the Surrey History Centre as part of the Guildford Borough Council collection (SHC ref BR/OC/2/6/6-8).