Thinking about what to put on your Christmas list?

Fed up with the same old presents? Perhaps you're dreading the Christmas overindulgence? Well spare a thought for Sir William More of Loseley, near Guildford (1520-1600), MP and faithful servant of Queen Elizabeth I. His accounts show without doubt that the answer to the age-old question of what to give someone who has everything is … a capon (a castrated male chicken)! 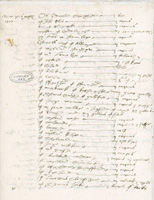 Each Christmas and New Year, neighbours, tenants and friends - humble and not so humble - plied More with gifts, all of which were carefully inventoried year after year. At New Year in 1575, a staggering 282 capons and a separately noted 'fat capon', were all presented to him. In 1577, 206 separate donors gave New Year presents, mostly consumables. And it was not only capons that made the perfect seasonal gift: peacocks, pigeons, geese, boars and pigs abound, in quantities that make most modern supermarket deli counters seem inadequate. And all this in an age with no proper freezing facilities!

More was impeccably Protestant and hard working but his piety and puritanical leanings did not mean that he ran a frugal, miserly household. Good entertainment was offered to those who came as guests, and More fully understood the need to display his wealth and status and impress his neighbours. Perhaps some of the food gifts were almost immediately consumed in a lavish feast such as the one More put on when his daughter married in 1567? Again More carefully records the gifts he received from guests. Lord Clinton is recorded as giving swans, capons, partridges, woodcock, hares, mutton fat, sugar loaves, 'two great boxes of marmalade' and wine; Roger Balam, a clergyman, and clearly not a member of the RSPB, provided vast quantities of waterfowl including cranes, herons, curlews, teals, mallards, plovers, swans, larks, 16 bitterns, knot, stints and godwits; a fitting gift considering one of More's offices was deputy swan master of Surrey.

Surrey History Centre holds the Loseley manuscripts, comprising the papers amassed by Sir William More and his descendants, who seem to have thrown nothing away. Cataloguing of the collection and the creation of a database for the many letters has brought to life untold treasures and detail about life in Tudor Surrey.