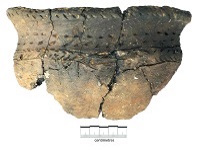 These sherds are from a decorated Neolithic bowl recovered during excavations at Hengrove Farm, near Staines, undertaken by the Surrey County Archaeological Unit (SCAU). The style of decoration is known as Peterborough Ware (c.3400–2700 cal BC), named after a site where a large number of these sherds were recovered. It is a type of pottery that developed out of plain Early Neolithic bowls and is very distinctive. This ware is commonly divided into three styles, Ebbsfleet, Mortlake and Fengate. Based primarily on the decoration, the vessel illustrated here 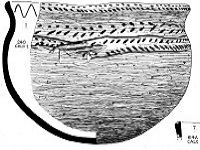 belongs to the Ebbsfleet style, characterised by its relatively simple decoration and form. The decoration that you can see would have been created by pressing the end of a stick into the soft clay, resulting in the rows of diagonal impressions along the rim and on the shoulder. What is curious about the decoration is that an accidental impression can be seen on the lowest two rows, bordered by two wavy lines, interrupting the pattern and after which the angle of the impressions changes. We do not know why the potter chose to do this rather than fix the damage at the time! The clay used to make the vessel contains crushed flint, which you can see protruding through the vessel surface. 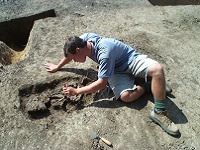 Most pits that contained Peterborough Ware at Hengrove Farm also contained other finds, primarily flint; however the pit containing this vessel and another with sherds from a Mortlake style bowl are quite distinctive in each containing a single vessel. This particular Ebbsfleet style bowl appeared to be lying on its side in a small pit where it seems to have been deliberately placed – it may be that the imperfect decoration was a factor in deciding to bury it in this way. Burnt residues were present on the inside surface of the pottery sherds which, when analysed for dating, provided a radiocarbon date of 3355–3095 cal BC and may be the remains of a burnt offering. Similar pits with single complete vessels have been recognised during excavations at Heathrow, so this may be part of a wider tradition of placed deposits. Generally the occurrence of Peterborough Ware in small pits, as at Hengrove Farm, is not an uncommon phenomenon in Surrey where Peterborough Ware distribution is focused along the Thames and gravel terraces. 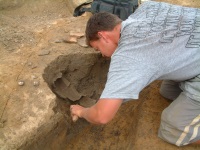 Along with this important Neolithic collection, the pottery assemblage from Hengrove also included Bronze Age, Iron Age, early Romano-British, Saxon and Medieval pottery as well as significant other finds and environmental collections. It has been recently published as SpoilHeap Publications Monograph 12: Foragers and Farmers, 10,000 years of History at Hengrove Farm, Staines. Excavations between 1997 and 2012 by R Poulton, G Hayman and N Marples, and is available from Surrey History Centre and Surrey County Archaeological Unit and from the heritage online shop.

Please select the images to enlarge them.