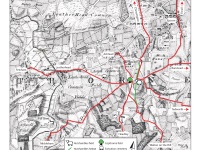 In 2014, The Woodland Trust acquired land for the Langley Vale Wood as part of the First World War centenary woodland project. The site, to the south-east of Ashtead, commemorates those who sacrificed so much during war, revealing the local stories and history of the landscape.

Surrey County Archaeological Unit (SCAU) carried out documentary research, as well as geophysics and field walking across the site, to help build a picture of how the land has been used in the past. One of the most interesting discoveries dates to the Saxon period. Today, little remains of it above ground other than a bank between two fields at the north of the site. It is possible that this bank signified the former presence of a major Saxon centre. 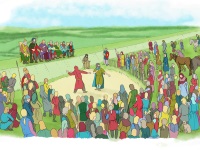 Early maps name the bank and a nearby field as 'Nutshambles', a corruption of Motschameles, a Saxon word meaning 'benches where the moot assembly sat'. The moot was where Saxon people from the surrounding area met to debate important matters and ensure that the laws were upheld. The site at Langley Vale was where the moot was held for Copthorne Hundred. It lay on the highest ground at the centre of the Hundred, and just to the east was a field called Copthorne, the original location of the 'pollarded thorn tree' from which the territory was named.

Careful archaeological survey did not reveal any trace of 'benches' or any part of the assembly arena. It is likely that everything that was needed was brought to the meeting and that there were no permanent structures. 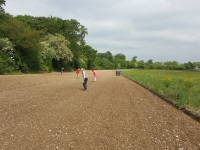 Astonishingly, though, direct evidence has been found for how justice was delivered at the moot. Criminals who were sentenced to death were taken along the road that led to Ashtead, before being executed by hanging or beheading, with their bodies thrown into hastily dug graves. The site of a 6th or 7th century pagan Saxon cemetery at Esso House was chosen for the burial of those executed for crimes that placed them outside the faith of Late Saxon Christian society. At least 16 execution burials were found during excavations in the 1980s, with several skeletons found to have had their hands tied behind their backs before they were hanged and put in shallow graves. 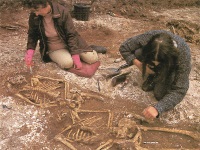