October is Black History Month. Surrey Heritage supports this international awareness campaign every year and recognises the need to preserve the history of Black lives in the county, raising awareness of the lived experience through our collections and outreach.

All year round we celebrate the lives and achievements of Surrey's Black people using historical material sourced from our unique archive and library collections. Through them we reveal local life stories, with context, some of them uncomfortable to read but acknowledging how people of colour were treated in the past. We believe these stories and our collections are a powerful tool in the fight against racial discrimination. You can access our comprehensive online 'Black History in Surrey' resource on our Exploring Surrey's Past website. If you can help us to develop our collections and expand the dialogue about Black presence in Surrey, either with stories or material, please contact us. 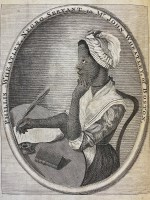 The 2022 Black History Month campaign theme is 'Time for change: Action not words.' However, it is the words of Phillis Wheatley (c.1753-1784), the first published Black American poet, that helped raise awareness of enslaved people in the late eighteenth century. In this Marvel of the Month we look at her life and her connection with Surrey History Centre's archive collections.

The Ware family of Tilford

The hamlet of Tilford lies south of Farnham, and the papers of the Ware family of Tilford House and its estate contain everything we would expect to find relating to both an ancient estate and a well-educated landowning family in Surrey. There are deeds, court rolls, and lots about the management of the estate and its produce. The collection is a genealogist's dreams with family diaries, obituaries, memoirs and many letters between family members, their friends and acquaintances. Yet perhaps what one would not expect to find is a rare eighteenth century book of poems written by Phillis Wheatley, an enslaved young woman, who is now generally acknowledged as the first published African American author and the 'Mother of Black literature'. 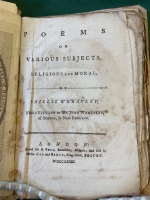 Phillis Wheatley's work 'Poems on Various Subjects, Religious and Moral', published in September 1773, is small, slim book and bound with plain card (SHC ref 1487/118/1). It may look insignificant and unassuming, but its importance belies its appearance as it packs a mighty message of how the words and observations of one Black woman in the late eighteenth century can become ground-breaking history.

Born c.1753, Phillis Wheatley was taken from West Africa at the age of about 8 years old and became enslaved in Boston, Massachusetts, USA. Her birth name is not known - she was given her Western name having been transported aboard a ship called 'The Phillis'. Phillis was purchased as a personal servant for the wife of John Wheatley, a wealthy American merchant. But Phillis' life soon became a complete anomaly as the Wheatleys educated her in English, Classics, literature and theology, at a time when African Americans were not schooled and actively discouraged from learning how to read and write. Phillis was clearly gifted and was said to have a natural curiosity and so she began writing poetry, with her first poem being printed in a local newspaper in 1767. Nineteen poems followed and Phillis' popularity spread but with no one in America willing to publish her work the Wheatleys wrote to the Countess of Huntingdon in England, for whose chaplain Phillis had previously written an elegy. Endorsed by British nobility, Phillis, aged only 20, embarked upon a publicity tour managed by John Wheatley.

Once in London, Phillis became a living testimony for the Abolition movement who lauded her abilities. As a result of her tour, her book 'Poems on Various Subjects, Religious and Moral' was published. The book carries an engraving of Phillis inside the front cover, posed with her pen, a rare artistic depiction of a Black person at that time. The poems are a mixture of heroic and classically inspired subjects, dedications to notable persons and friends, and religious fervour, reflecting her education by the Wheatleys. One poem, however, gives us an insight into Phillis' past life. 'On being brought from AFRICA to AMERICA' contains language that today is unacceptable to us, and critics believe that the line 'Some view our sable race with scornful eye'** reveals her awareness of the racial prejudice she experienced, despite her obvious literary talent. The incredible achievement of Phillis' poetry was the catalyst to her being granted freedom. It was however a freedom short-lived, as following the deaths of both John and Susanna Wheatley, Phillis died in poverty in 1784.

The importance of provenance 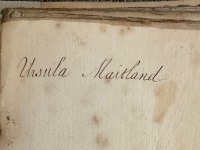 As archivists we always stress the importance of provenance: where do items come from and who did they belong to? All this information helps us to understand and catalogue items more accurately. So, who owned this book and what is it doing in the Ware family collection? The inside front cover of this volume bears an inscription that it was owned by Ursula Maitland. Ursula (formerly Polhill, 1756-1836) married her second husband, James Ware FRS (1756-1815), an eye surgeon, and they had six children. Pencil notes tucked inside the volume show that someone had briefly researched Ursula and the book itself some years ago. The Ware family were devoutly Christian; some were Anglican, others Nonconformist, and they were involved in a huge number of philanthropic concerns. With this in mind, it makes perfect sense for Ursula, as a woman educated in Christian teachings, to have owned a book of poems which reflected these values. We assume that she also supported the abolition of slavery and was interested in religious writings, as well as literature. We don't know where Ursula would have purchased the book, it may even have been a gift, but slavery was abolished during her lifetime and we can only wonder at her feelings about this momentous piece of legislation.

Discover more about Phillis Wheatley and the Ware family on our Exploring Surrey's Past website. 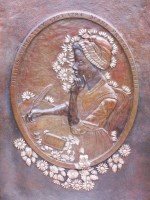 Surrey has another connection with Phillis Wheatley. At Runnymede she is featured in The Jurors artwork, a sculpture by Hew Locke which was commissioned by Surrey County Council and the National Trust to mark the 800th anniversary of the sealing of Magna Carta. It comprises twelve intricately worked bronze chairs representing concepts of law and key moments in the struggle for freedom. Phillis' story reflects the injustice of slavery and is combined with that of Mary Prince (1788-1888), the first woman to present an Anti-Slavery petition to the British parliament (1828), and the first Black woman to write and publish an autobiography (1831). The sculpture allows new generations to learn about the achievements of Black people amidst abhorrent cruelty and prejudice.

Find out more about this chair (number 5), and the others represented, on the National Trust website .

**As archivists and historians, when we look at decolonising our collections, we address issues of power, racism and inequality in our shared history. We acknowledge that Phillis' work contains language acceptable at the time she wrote but no longer so. It is clear that the stylised vocabulary she used reflects her western Christian education as an enslaved woman but this does not take away from her very obvious talent as a poet.