Old cottages and farmhouses in Surrey

At the end of the 19th and beginning of the 20th century, there was widespread concern about the destruction of ancient buildings and the rural way of life due to the expansion of London's commuter belt. These concerns provided the climate in which many architects and artists documented and recorded what they saw to be fast-disappearing features of the Surrey countryside. At Surrey History Centre, we are fortunate to have in our local studies collection many books published on architecture and rural life around this time.

Old cottages and farmhouses in Surrey: with an introduction and sketches by W Curtis Green is primarily a photographic record of traditional domestic architecture that William Galsworthy Davie (1841-1915) identified as being at risk from destruction, due to a lack of recognition. Galsworthy Davie was a retired architect who had a talent for photographing buildings. He produced a number of illustrated books that document rural architecture, including Architectural studies in France (1877) and Old cottages and farmhouses in Kent and Sussex: with descriptive notes and sketches by E Guy Dawber (1900). 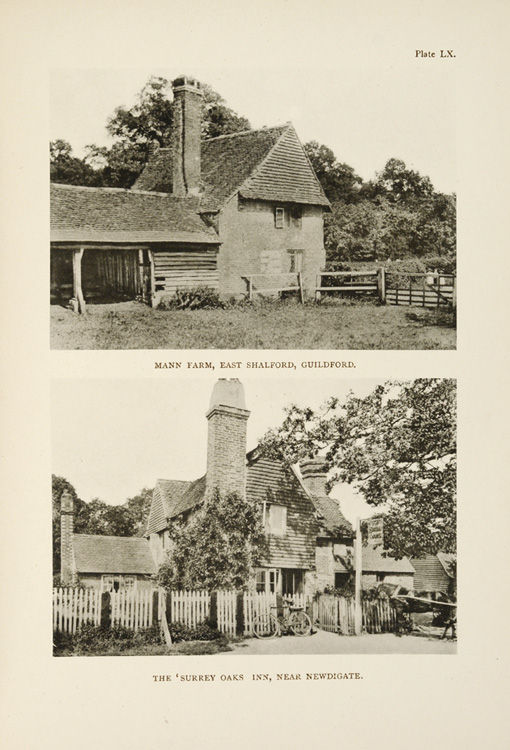 The author and illustrator of the introduction to this book was the architect William Curtis Green (1875-1960). He was born in Alton, Hampshire, and lived in Surrey. He designed two houses for his own occupation, 'Langdown' in Frensham and 'Goodmans Furze' in Headley. Other local examples of his work include the Church of the Good Shepherd, Dockenfield, and St Christopher's church, Cove.

Other architectural books in our local studies collection that may be of interest include Ralph Nevill, Old cottage and domestic architecture, in south-west Surrey (1889) and Gertrude Jekyll, Old West Surrey (1904).

Plate XCI, shows two agricultural buildings, located at what is now the Hog's Back Brewery, Manor Farm, The Street, Tongham. The barn is still recognisable but the cart shed and granary have been demolished to make room for a car park. Click on the image to enlarge it.