The history of Christmas

Early Christians looked to Easter as the main religious holiday. The birth of Christ was not celebrated until the 4th century. Pope Julius I (died 352) chose 25 December as the day to mark 'Christ's Mass', even though the actual date of Christ's birth is not recorded in the Bible. It was around this time of year that the Romans had marked the festival of 'Saturnalia'. By the Middle Ages, Christmas was being celebrated over a 12-day period.

Cromwell is often accused of banning the celebration of Christmas, but even before he came to power, many Protestants believed that it was a frivolous addition to the religious calendar. In 1644 Parliament ordered that the observation of Christmas should be "kept with the more solemne humiliation" rather than "giving liberty to carnall and sensuall delights". In 1647 the Commons ordered that those who did open their shops on Christmas Day were to be protected by the local militia because they had "suffered very many and great affronts, abuses, and prejudices". During the 1650s, ordinances issued by Parliament prohibited the holding of special Christmas services, although many people continued to do so in secret.

This anti-Christmas feeling was widespread. In Scotland celebrations had been banned since 1560; although James I did legalise Christmas in 1617, it was soon banned again in 1640. In America celebrations were banned between 1659 and 1681.

The Restoration of the monarchy in 1660 brought about the revival of 'old Christmas Day', but it was not until 1834 that it was designated a public or bank holiday. The 1871 Bank Holidays Act only included the newly established Boxing Day, believing that Christmas Day was, by tradition, already a rest day. However, Charles Dickens's Christmas Carol, published on 19 December 1843, clearly shows that it was up to the employer to grant their employees a day off. For some people, this was the only day that they could get married.

Some Christmas traditions go back centuries although their origins are now largely forgotten. These include the Yule Log which is meant to burn over the 12 days of Christmas. Mince pies date from the Middle Ages and were referred to as 'Relics of the Whore of Babylon' by 17th century Puritans! In 1800 George III's wife, Queen Charlotte, introduced the old German tradition of a Christmas tree, although it would not become fashionable in Britain until Victoria's reign. During the 1840s the confectioner Tom Smith introduced crackers of sweets and toys wrapped in colourful paper; in 1847 their popularity rose when he included the 'crackle' element making a mild bang.

One Christmas figure who has changed over the centuries is Father Christmas, who began as Saint Nicholas of Myra in the 4th century, famous for giving presents to the poor. During the Middle Ages the poor received their presents on 6 December, St Nicholas's feast day. With the abolition of saint days during the Reformation, it is possible that this tradition disappeared in this country. It was only in Victorian times that Father Christmas began delivering presents to children. He also goes by various other names, and it was in 1773 that he was first referred to as Santa Claus (from the Dutch 'Sinterklaas').

Here are a few of the items with a link to Christmas in our collections (click on the images to enlarge them): 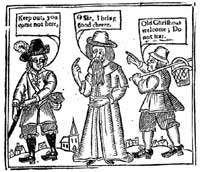 Cover of John Taylor's pamphlet The Vindication of Christmas (1652). This pamphlet showed that many people ignored the 'banning' of Christmas, although many probably observed the day, like the diarist John Evelyn of Wotton who records for 25 December 1654, "Christmas Day, were no public offices in churches, but penalties to the observers: so I was constrained to celebrate it at home". On other occasions Evelyn celebrated at his friends' houses. However, in December 1657, he journeyed to London and was arrested at gunpoint and questioned as to why he was celebrating Christmas. The Diary of John Evelyn, ed. E S De Beer (Oxford University Press, 1959) pp.355, 385.

2nd Battalion, Queen's (Royal West Surrey) Regiment taking part in a Christmas Truce on the Western Front, 1914. The Battalion's War Diary (Surrey History Centre (SHC) ref QRWS/2/7/1) records that an armistice between the battalion and the German 55th Regiment began at 11am. The truce ended at 4.00pm with an agreement to resume the following day between 9am to 3.30pm. However, not all guns were silent. 43 British soldiers were killed on 25 December 1914, with 40 others dying from their wounds. This was the second time the battalion had taken part in an unofficial truce, the first taking place on 19 December.

The 1st Battalion, East Surrey Regiment, celebrated the first wartime Christmas very differently in their 'dirty billets' as the Battalion Diary (SHC ref ESR/2/7/2) records: "Open air divine service for the Battalion followed by the reading of the Brigadier's greeting to the Battalion, which was heartily cheered and the distribution of their Majesties' cards and Princess Mary's gifts. All were much gratified in being thus honoured". The 1st Battalion, Queen's, had a similar Christmas. Princess Mary's gifts consisted of one ounce of pipe tobacco, twenty cigarettes, a pipe, a tinder lighter, a Christmas card and a photograph in a brass box. For non-smokers the box contained a packet of acid tablets, a khaki writing case containing pencil, paper and envelopes together with the Christmas card and photograph of the Princess (SHC ref QRWS/3/11/3 p.17)

In 1843 the first Christmas card was produced by Sir Henry Cole, although it cost one penny to send. In 1870, when the cost of postage dropped to half a penny, cards quickly became more popular. The card shown is dated 1878 and was sent to Caroline F Foljambe, who married Arthur Francis Gresham Leveson Gower of Titsey Place, Limpsfield. (SHC ref 498/2/1).