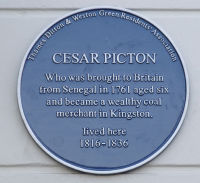 Britain has a rich and extensive multicultural past that has shaped its identity as a whole over the centuries. Surrey History Centre holds key documents that help uncover the story of Black History in the county, and some of these relate to the remarkable life of Cesar Picton (1755 to 1836). Cesar Picton's life was not bound up with the slave trade; by contrast, he was a protégé of the wealthy Sir John Philipps and, by the end of his life, was a successful coal merchant, having lived in Kingston, Thames Ditton and elsewhere. Much of the research on Cesar's life comes from Kingston-upon-Thames Archaeological Society (KUTAS, SHC ref 8263/2/7).

Cesar was born into a Muslim family in Senegal in 1755, but was brought to Picton Castle in Pembrokeshire, belonging to Sir John Philipps, baronet and MP for Pembrokeshire, by Captain Parr on 8 November 1761. Philipps wrote about one of his return journeys to another residence of his, Norbiton Place, with "a Black Boy from Senegal given to me by Capt. Parr, also a paraquet and a foreign Duck". Cesar was christened by the Rev Dr Philipps on Sunday 6 December 1761.

In June 1762, Cesar was taken to Picton Castle where he trained in household work and was educated. He never became a servant as Sir John's only surviving son already had a servant. Cesar was treated very well by the family and was accepted as one of their own. Lady Philipps died when he was about 33, and left him the large sum of £100 in her will. He also received legacies from her daughters on their deaths.

After he received his inheritance from Lady Philipps, the family sold Norbiton Place and the daughters moved to Hampton Court. Cesar rented a modest house in Kingston and at some point in 1788, he bought the house and assumed the surname 'Picton' from the name of the castle where he spent his early years. Intriguingly, Cesar was never active in the abolitionist movement, and was never a signatory of letters and petitions concerning the slave trade. Sir John had an interest in, and connections to, the coal industry, undoubtedly sparking Cesar's choice of business. In 1816 he bought a large cottage in Thames Ditton for the astonishing sum of £400, far above his inheritance, showing he had become a wealthy businessman.

Cesar Picton died on 10 June 1836, aged 81, a wealthy and respected man, and was buried in All Saint's Church in Kingston. In the will of the wealthy William Porter in 1807, he is described as 'Caesar Picton of Tullworth, gentleman', suggesting his rise up the social ladder. Picton's own will (transcribed in a KUTAS study, SHC ref 8263/2/7) features prominent names such as his goddaughter, Sarah Lock Pinner, who married William Pamphillon, a mayor of Kingston in the 1850s, and mentions expensive items such as a tortoiseshell tea chest with a silver caddy-spoon and a horse and chaise. His funeral was modest, with no more than 8 mourners, but his coffin required 10 bearers instead of the usual 4 to 6 (KX.21 at Kingston History Centre).