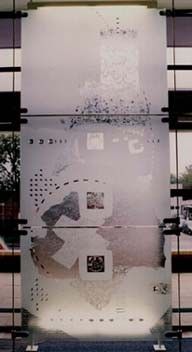 Surrey in Glass is in the foyer at Surrey History Centre. It was designed by Martin Donlin. The design is based on images of Surrey, of history and of historical materials.

In the lower part of one panel, the figure of history, with scroll and pen, is shown within a circular pattern which includes a cross section of a tree showing the rings which record growth and reflect change over time. The pattern of contour lines is based upon the area around Box Hill and symbolises the almost unchanging topography of the county.

The text includes an extract from Camden's Britannia describing Surrey, and a dictionary definition of 'historical'. There is also a list of the Surrey hundreds, the medieval divisions of the county. These include Godalming and Farnham, which are the names of towns, Elmbridge which is the name of a modern district council area, Blackheath which is now the name of a tiny place, and Godley (the area around Chertsey) which was probably never the name of anything other than the hundred.

The shape of the modern district of Spelthorne is seen to the left of the list of hundreds. Spelthorne was a hundred of Middlesex, and gave its name to the new borough formed in 1974 out of the districts of Staines and Sunbury, which had passed into Surrey in 1965.

The figures on the second panel are the mythological ages of the world: the golden age of innocence and harmony with an olive branch, the symbol of peace; the silver age of right and wrong with the scales of justice; and the iron age of war and inhumanity and the serpent as a symbol of deceit.

In the lower part of this panel, Bowen's county map of 1760 is shown, with a large X identifying Woking. Above, is a plan of Orchards near Godalming by Edward Lutyens.

A special feature of both panels are the real optic lenses attached to the glass. These signify the looking through time, both at the past and at the future, and also the distortion that can occur through too close a study.