The administrative boundaries of the county of Surrey 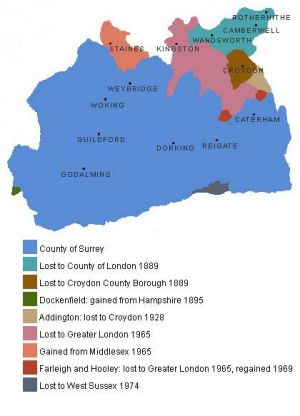 Since 1889 there have been some major changes in the administrative boundaries of the county of Surrey. This affects the records held at Surrey History Centre.

The above map depicts these major changes, however it should be noted that there have also been several minor changes to the Surrey boundary over the years and these are not shown.

Learn more about the changing boundaries of Surrey.

If you are intending to visit Surrey History Centre with an enquiry relating to one of the areas which came into Surrey or has left it, please contact us beforehand to check whether we can help.