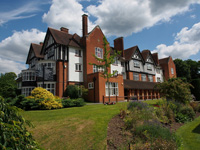 Reed's School was founded by the Rev Andrew Reed (1787-1862) in 1813 and was originally known as the East London Orphan Asylum. In 1815, the word 'East' was dropped from the original title in order to attract more than just local support.

Reed does not seem to have had much personal wealth, but he had an extraordinary ability to attract the support and patronage of those who did. The Duke of Kent presided at the first annual festival dinner in 1815, establishing a virtually continuous history of royal patronage of the charity. Reed was able to secure financial support from the Stock Exchange and City Livery Companies, again establishing a tradition which has continued throughout the history of the school.

With this support the number of children taken in gradually grew and a house was acquired in Hackney Road for the boys and one in Bethnal Green for the girls. By 1820 this accommodation was inadequate and 8 acres of land were purchased at Clapton as the site for new buildings. The foundation stone was laid by Frederick, Duke of York on 5 May 1823 and the new buildings were completed by 1825 and were officially opened on 16 June by the Duke of Cambridge.

When the school moved to Clapton, it occupied a semi-rural location but by the 1860s this was no longer the case. In November 1866, a typhoid epidemic killed 15 children and precipitated the board of managers into a decision to move the school to a new site. In 1867, they purchased 36 acres of land at Watford for the new school and the foundation stone was laid by the Prince of Wales, later Edward VII, on 15 July 1869. The school was formally opened in 1871. The buildings included separate classrooms and dormitories for boys and girls, a dining hall and chapel.

In 1915 the institution was renamed the London Orphan School. In 1922, the school amalgamated with the Royal British Orphan School, Slough, which had been forced to close for financial reasons. Both the funds and pupils of the Slough school were taken over and transferred to Watford.

In 1939 the school was renamed Reed's School in honour of the founder. In 1940, the school buildings were requisitioned by the Ministry of Works for use as an army hospital and all the pupils were evacuated, the boys to the Seymour Hotel, Totnes, Devon, and the girls to a number of houses near Towcester, Northants. After the war the governors decided not to return to the school at Watford, which the government in any case wished to retain as a headquarters building for the Ministry of Labour. In 1945 Dogmersfield Park, near Basingstoke, Hants, a large country house with about 120 acres of grounds, was purchased for the girls' school. For the boys an estate of 56 acres with the buildings previously used by Sandroyd School in Sandy Lane, Cobham was purchased in 1946. Unfortunately financial difficulties made it impossible to maintain both schools and Dogmersfield Park had to be closed in July 1955 so that all the resources could be concentrated at Cobham where the school is today.

The objects of the charity were to provide relief to destitute orphans, 'to rescue them from the walks of vice and profligacy; to provide them clothing and maintenance; to fix the habits of industry and frugality; to train them in the path of religion and virtue agreeably to the formularies of the Church of England and to place them out in situations where their principles shall not be endangered and the prospect of an honest livelihood shall be secured'. Orphans were defined as children who had lost both parents or their father, with the mother unable to provide for them. It was emphasised from the beginning that children whose parents had been in respectable circumstances had the first claim on the charity. Children were generally admitted by election between the ages of 7 and 11.

For more about the school see the Catalogue of the records of the school held at Surrey History Centre.

A volunteer at Surrey History Centre, faithfully and patiently transcribed the names of the children admitted and other details as above from the Annual Reports, 1818-1901 (SHC refs 3719/1/1-29). The index gives the year of the Annual Report, the child's name, the year the child is first recorded in the Annual Reports and the years when the child appears in subsequent reports.

To search the index, please select the filenames at the bottom of this page.