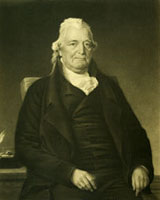 The archives of John Broadwood and Sons, held at Surrey History Centre, are a rich source for the history of this world famous piano manufacturing company and the many thousands of instruments they made. The archives are extensively used for tracing the history of individual pianos.

Scottish born John Broadwood, aged 29, was apprenticed to Burkat Shudi in 1761. Shudi, originally from Switzerland, had his own harpsichord workshop in London from 1728. He counted royalty among his customers including Frederick, Prince of Wales, and Frederick the Great of Prussia. John Broadwood married Shudi's daughter Barbara in 1769 and was assigned the running of the business in 1771, assuming full control on Shudi's death in 1773. The premises in Great Pulteney Street and Bridle Lane, Soho, were gradually extended to accommodate the increased output of square and grand pianofortes. In 1796 Manuel de Godoy commissioned a piano for the Queen of Spain, with a case designed by Thomas Sheraton with Wedgwood medallions. It is now in the Museum of Fine Arts in Boston, USA.

In August 1817 Thomas Broadwood met Beethoven in Vienna, and later recalled, 'he was kind enough to play to me but he was so deaf and unwell that I am sorry to say I had no opportunity of marking any thing like an anecdote'. Thomas sent Beethoven a gift of a 6 octave grand pianoforte made from Spanish mahogany. Beethoven was delighted and wrote to Thomas in 1818 that 'I shall immediately send you the fruits of the first moments of inspiration I spend at it'. The piano later belonged to Franz Liszt and is now in the National Museum of Hungary in Budapest.

Technical innovations in the development of pianos followed, especially in the introduction of metal bars to give greater power and volume. Henry Fowler Broadwood the eldest son of James Shudi Broadwood, joined the partnership in 1836. By the 1840s around 2500 pianos a year were being made at the factory leased in 1823 in Horseferry Road, Westminster. Broadwoods were now among the largest employers of labour in London.

In 1848 Chopin was provided with Broadwood grands for his British visit. The grand piano no.17047 that he used for concerts at Mrs Sartoris' house, 99 Eaton Place, on 23 June 1848, now belongs to the Royal Academy of Music and is on loan to the Cobbe Collection Trust, Hatchlands Park, East Clandon, Surrey.

The Horseferry Road factory site burnt down in a disastrous fire in 1856. Much of the money to rebuild the factory came out of Henry Fowler Broadwood's own pocket.

The death of Henry Fowler Broadwood in 1893 and a period of financial crisis led to the partnership being wound up in 1901 and replaced by a limited company. Members of the family continued to be involved in the running of the firm, as directors and as employees, and Henry Fowler's grandson, Captain Evelyn Broadwood, chairman from 1931, was actively engaged in the firm until his death in 1975.

When the lease on the Horseferry Road premises expired in 1902, all production moved to the Old Ford Works, Stour Road, Hackney. The firm began to diversify and produced automated 'player pianos' or pianolas from 1902. One of these went with Captain Scott's Antarctic expedition. The company also produced gramophones in the 1920s.

In 1903, the firm moved the office and showrooms from Great Pulteney Street to premises in Conduit Street. The new showroom opened on 2 May 1904 with an exhibition of 'artistic' pianos and a brochure was produced to accompany the display.

During the First World War the firm made aircraft bodies and parts for De Havilland and ammunition boxes. The long history of royal patronage was demonstrated again by the visit of King George V and Queen Mary to the Old Ford factory in 1926.

Thereafter the firm experienced a large number of ups and downs in an increasingly difficult market place. However pianos are still made today.

On the death of Captain Broadwood in 1975, the house and estate were administered by the Broadwood Trust. The archives of the business and a large number of papers relating to members of the Broadwood family, including Lucy Broadwood the folk song collector are now housed at Surrey History Centre in Woking. They have been the subject of an extensive conservation programme.