Between 2005 and 2014 the archives of the Lushington family of Ockham Park and Pyports in Cobham, Surrey, and of Kensington Square, London, were deposited at Surrey History Centre.  In his life of Sir Leslie Stephen, Noel Annan wrote of the emergence in Victorian society of an intellectual aristocracy which profoundly influenced English politics, education and literature during the 19th century.  The Lushington family were part of that group.

Three generations of the Lushington family

Dr Stephen Lushington (1782-1873) was an eminent lawyer who made his reputation as counsel to Queen Caroline, wife of King George IV, and to Lady Byron in their divorce cases.  Throughout his life, Stephen was an ardent reformer and sympathetic to the Evangelical church movement, campaigning for the abolition of capital punishment and supporting his friend William Wilberforce by speaking in favour of the Slave Trade Abolition Bill. He was also involved with members of the Clapham Sect.  Stephen Lushington spent the last years of his life at Ockham Park, Surrey, which belonged to Byron's daughter, Ada Lovelace.  A neighbour wrote 'At Ockham Park the famous Dr Lushington collected around him the cleverest folk of the day' and visitors at Ockham included John Ruskin, William Holman Hunt, William Michael Rossetti, Thomas Woolner, Elizabeth Gaskell, Edward Lear, Benjamin Jowett and the Christian Socialist F D Maurice.  At Ockham Stephen's daughters took over the running of the Ockham Industrial Schools which had been created under Lady Byron's influence.  Stephen Lushington was a judge of the High Court of Admiralty from 1838 and Dean of Arches from 1858 to 1867.  He died at Ockham Park in 1873. 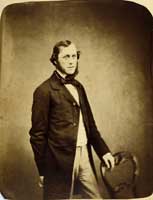 Vernon Lushington (1832-1912) was the fourth of Stephen's sons.  Vernon was a graduate of Trinity College, Cambridge, where he became a member of the Cambridge Apostles; his contemporaries included F D Maurice, John Sterling, Arthur Hallam and Alfred Tennyson.  Through the society he was introduced to John Stuart Mill and Thomas Carlyle for whom he worked for a period as an unpaid secretary, receiving Carlyle's unstinted praise.  At Cambridge Vernon came under the influence of Auguste Comte and Positivism.  Through Positivism Vernon met Frederic Harrison who introduced him into a new circle of friends which included George Eliot, Herbert Spencer and Anthony Trollope.  Another close friend was Richard Monkton Milnes at whose parties in London Vernon met Palmerston, Dickens, Browning and Landseer.  Vernon's twin brother Godfrey introduced him to William Morris who persuaded him to contribute an article on Carlyle in the first issue of 'The Oxford and Cambridge Magazine'.  Morris later became a life-long friend of Vernon's.  Through the Cambridge booksellers, Daniel and Alexander Macmillan, Vernon was drawn into Christian Socialism and went on to serve on the Council of the Working Men's College alongside Lowes Dickinson, John Ruskin, D G Rossetti and the sculptor Alexander Munro.  It was also through the Working Men's' College that Vernon met Arthur Munby, the extraordinary barrister cum poet who had a questionable obsession with working class women.  Links with the Working Men's College led Vernon to introduce Edward Burne-Jones to Dante Gabriel Rossetti.  Burne-Jones later wrote to Vernon, 'My first introduction to Gabriel was your doing - and big results it brought into my life'.  With his friend, the sculptor, Thomas Woolner, Vernon visited Alfred, Lord Tennyson, on the Isle of Wight and became a close friend of the family.

From the late 1850s Vernon and his brother Godfrey became increasingly involved with Beesly, Harrison, Crompton, J N Bridges and Congreve in helping the Labour Movement.  Sidney and Beatrice Webb wrote of 'the talented young barristers and literary men, who, from this time forward became the trusted legal experts and political advisors of the leaders of the Trade Union Movement'.  Vernon and Godfrey took up the cause of Lancashire Cotton Operatives who were starving as a result of the sudden stoppage of American cotton during the Civil War.  Vernon corresponded about this cause with the novelist Elizabeth Gaskell to whom he was known as 'Cousin V'.  Vernon was also a close friend of the social reformer Charles Booth and their two families were often together.

Sir Godfrey Lushington, GCMG, KCB (1832-1907), Vernon's twin brother, was a civil servant and promoter of prison reform.  He was Permanent Under-Secretary of State at the Home Office from 1886 to 1895.  During his Home Office tenure the Whitechapel Murders gripped the public attention and imagination.  He also took an active interest in the Dreyfus Affair and wrote one of the longest letters ever published by 'The Times' on the matter.  Godfrey Lushington's wife Beatrice, whom he married in 1865, was daughter of Samuel Smith of Combe Hurst, Surrey, and granddaughter of William Smith MP and a cousin of Florence Nightingale and Barbara Bodichon.

Vernon and Godfrey's sister Alice Lushington (1829-1903) was a pioneer educationalist.  She became Lady Principal of the First College for Training Women Teachers for High Education opened in 1878, now called the Maria Grey Training College.  She was also Lady Principal of the College for Female Pupil Teachers of the Voluntary School in Liverpool which opened in 1881.  Together with her sister Frances (b. 1827), she later opened the Ockham Schools in Kingsley, Hampshire.

After their marriage Vernon and Jane Lushington lived for a while at Wheelers Farm, Pyrford, before moving to Pyports, Cobham, while maintaining 36 Kensington Square as their London home.  They had three daughters, Katherine, Margaret and Susan, who together represent the third generation in the archive.  All three were talented musicians and were tutored by Sir Hubert Parry, a family friend. Hubert called Kitty 'my darling Kittiwake'.  The artist Arthur Hughes, another family friend, painted a portrait of Jane Lushington and the three girls at their Cobham home, entitled 'The Home Quartet'.  For their more formal education the girls were taught for a while by the novelist George Gissing.  After their mother's early death, the three girls were taken under the wing of Mrs Julia Stephen, wife of Sir Leslie and she became a second mother.  The Stephen and Lushington families had been close neighbours at Kensington Square in London.

In 1890 Katherine 'Kitty' Lushington (1867-1922) married Leopold Maxse the journalist and political writer whose family then lived at Dunley Hill near Effingham, Surrey.  She became a well-known London hostess.  The Maxse family were friends of George Meredith who lived nearby at Box Hill.  Kitty's friendship with Virginia Woolf resulted in her being used as the model for 'Mrs Dalloway' in Woolf's novel of that name.  Kitty and Leo were engaged at Talland House in Cornwall which was the summer residence of the Stephen family.  Woolf later used events at the summer house parties at Talland as the basis of her novel 'To The Lighthouse'.

Margaret Lushington (1869-1906) married Stephen Massingberd of Gunby Hall, Lincolnshire, at Cobham in 1895 and Stephen's cousin, the young Ralph Vaughan Williams, played the organ.  The Massingberds were related to the Wedgwoods and the Darwins and Stephen's mother Emily Caroline Massingberd was a well-known campaigner for women's rights.  Margaret and Stephen organised music festivals in Lincolnshire and it was probably during one of his visits to Gunby that Ralph Vaughan Williams conceived the ideas for his composition 'In the Fen Country'.

Susan Lushington (1870-1953), the youngest daughter, never married.  After her father's death she moved to Kingsley just over the Surrey border in Hampshire.  There she established herself as a rather eccentric, somewhat formidable, but much loved personality.  She lived an extremely active and varied life, taking part in musical pursuits of all types and was awarded the MBE in 1943.  Many of her musical friends including Ralph Vaughan Williams participated in these musical events.  Among her circle of friends in her early years was the explorer and diplomat Gertrude Bell.

History of the archive

Nearly all the Lushington papers, portraits and other pictures eventually passed to Susan Lushington and were kept at Kingsley where she lived until her death.  In 1942 Susan Lushington wrote to her cousin Frank Norris 'We have all been told to empty our drawers of old letters for the Government Salvage, but I find it very difficult to give up delicious letters of the past which I have always kept in reserve for my old age!  There are all Grand papa's old road maps & note books & little old things kept by Aunt Fanny & all our children [sic] letters to father from Pyports & my letters to him from India etc.  Must they all go & make lining for shells?  It's a grim thought that no one after me would want them'.  Fortunately Susan did not follow Government advice and most of the archive was retained.  From time to time she made items available to researchers.  One author in particular was William Gaunt who stayed with Susan when researching his pioneering work 'The Pre-Raphaelite Tragedy' in 1942.

Contents of the archive

The archive consists mainly of thousands of letters between the various family members including Stephen, Vernon and his three daughters.  There is also a large collection of Susan Lushington's correspondence, diaries and other material relating to her life and interests at Kingsley.  There is much of interest for researchers into 19th and 20th century art, music, politics and social life.

The archive is notable for the 20 year correspondence between Vernon and Jane Lushington covering the whole of their married life and containing over 1000 letters.  When Vernon travelled the circuit as a County Court Judge he wrote to his wife frequently, often describing the town and villages in Surrey and Hampshire in which he was staying or through which he had passed.  The letters to and from all members of the family contain a great deal of information about life at Pyports and in the village of Cobham.  Susan's diaries from the 1890s contain detailed and colourful accounts of her activities and visitors both to Pyports and their London home.  These included Thomas Hardy who in his own journal wrote of how he had dined with the Lushingtons and had seen the portrait of Stephen Lushington 'the man who had known the Byron secret'. 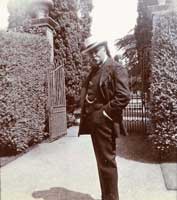 Other families with close links to Vernon and Jane Lushington whose correspondence features in the archive include Montgomery of Blessingbourne, Ireland; Massingberd of Gunby Hall, Lincolnshire; Bell of Rounton Grange and Mount Grace Priory; Howard of Naworth; Stanley of Alderley; Rathbone of Liverpool; Farrer of Abinger; Buxton of Surrey; Vaughan Williams of Leith Hill Place and High Ashes, Surrey; Darwin of Down House and Cambridge; and Litchfield.  Significant items within the archive include letters from Sir Hubert Parry, composer; letters from George Howard, 9th Earl of Carlisle, artist; letter from Thomas Hardy, writer; letters from Ralph Vaughan Williams, composer; letters from William Robinson, pioneer gardener; letters from Arthur Hughes, Pre-Raphaelite artist, and members of his family, a letter from William Holman Hunt, Pre-Raphaelite artist, and letters from members of his family, and letters from Archie Montgomery - later Field Marshal Sir Archibald Amar Montgomery-Massingberd, (1871-1947) - serving in the Boer War in South Africa.

The later correspondence of Susan Lushington is also of great interest for its musical connections and the light it sheds on her musical performances at Kingsley.  During World War I Susan corresponded with a large number of servicemen who were based at the army camp at Bordon near her Kingsley home.  They were invited into her home to share her musical interests, and later wrote back to her from the front line.  The World War I correspondence contains graphic accounts of life in the trenches and includes letters from Susan's relation Franklin Lushington who served with the poet Edward Thomas.

There is also a fine series of photograph albums, chiefly covering the period 1870-1910 which illustrate many of the people and activities featured in the written archive.