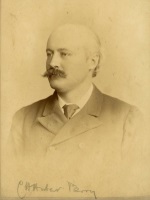 This year marks the centenary of the death of the great English composer, Sir Charles Hubert Hastings Parry (1848-1918). Parry is now best remembered for his setting of William Blake's 'Jerusalem' and the coronation anthem 'I was glad'. It is not perhaps widely known that Parry had connections with Surrey. His daughter Dorothea married Arthur Ponsonby, the son of Sir Henry Ponsonby, Queen Victoria's Private Secretary. The couple settled at Shulbrede Priory, Lynchmere, a place where the counties of Surrey, Sussex and Hampshire meet. Parry was a frequent visitor to Shulbrede and often stayed there for lengthy periods. 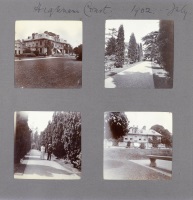 However, there is another more direct Surrey connection with Hubert Parry through the Lushington family whose archive is held in the Surrey History Centre (SHC ref 7854). There are a number of letters from Parry and his family to members of the Lushington family, especially Susan Lushington (SHC ref 7854/4/29/-). Additionally, Susan Lushington's diaries contain many references to Parry and quite lengthy descriptions of her visits to the Parry family at their home in Rustington on the south coast. 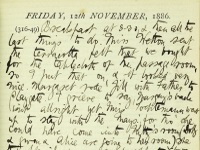 The Lushington girls and their mother first met Parry at the home of their mutual friends, the Montgomerys, at Blessingbourne in Northern Ireland. Parry delighted in the company of the young people he met at Blessingbourne and joined in the fun and games which were a feature of house parties there. In London, Parry frequently visited the Lushingtons at their Kensington Square home, often to ask the girls to try out some new composition of his or to play at a concert. He composed two simple Intermezzi for String Trio dedicated to 'K, M and SL' [Kitty, Margaret and Susan Lushington]. Kitty, the eldest of the three, seems to have been Parry's favourite and he affectionately named her 'Kittiwake'. 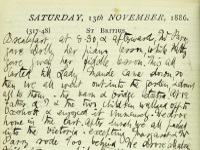 In 1886 Parry brought his family to Pyports, Cobham, the country home of the Lushingtons. Parry made music with the family and the Lushington girls gave lessons to his daughters. Parry had a shared love of horse riding with Susan Lushington and, on one occasion, he rode down from London to Cobham. The journey took three hours travelling via Richmond Park. Parry greatly enjoyed the woods and countryside between Esher and Cobham. On another visit to Pyports he "retired to his room to work", presumably on a new composition.

In addition to the letters and diaries, the Lushington archive also contains albums containing informal photographs of Parry at Highnam Court, Gloucester.