Walt Whitman in the Lushington archive 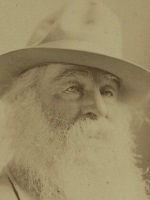 Among the many gems in the Lushington family archive at Surrey History Centre is a small printed postcard, dated 5 August 1876, addressed to Vernon Lushington and sent from Camden, USA. When I catalogued the archive this was initially put on one side under 'Miscellaneous'. However, the address of the sender, Camden, and scrawled initials 'WW', led me to undertake further research. The card proved to be from the great American poet Walt Whitman acknowledging Lushington's order of a copy of Leaves of Grass.

The bicentenary of Whitman's birth this month will be celebrated on both sides of the Atlantic. Whitman's reputation in Great Britain was due to a small group of admirers that included Tennyson and Ruskin. He acknowledged this when he wrote how Leaves of Grass had "bubbled forth as a fresh spring from the ground in England in 1876 … it was a critical and turning point in my personal and literary life." 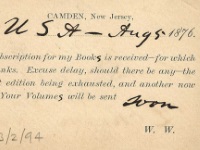 William Michael Rossetti, brother of the Pre-Raphaelite painter Dante Gabriel Rossetti, had brought Whitman to the British public's attention in 1867 through an enthusiastic appreciation of the poet in the London press. It was almost certainly William who introduced Whitman's work to Vernon Lushington. The two had met through the London Working Men's College. A shared love of poetry took them to Italy in 1860 to visit the Brownings.

The Lushington archive contains several items of interest to Whitman scholars. In an 1868 letter to his wife from Liverpool, Lushington wrote, "Going down in the train last night I read till dark Walt Whitman. A wonderful fellow, a wonderful poet, beyond all doubt." Susan Lushington later recalled how her father would spontaneously quote Whitman whenever he was in a particularly happy mood. But this appreciation extended beyond the emotions the verse engendered. For Lushington there was a deeper meaning in Whitman's poetry. Lushington was a Positivist, a follower of Auguste Comte, whose secular philosophy made a considerable impression upon a number of England's 'intellectual aristocracy' in the second half of the nineteenth century. 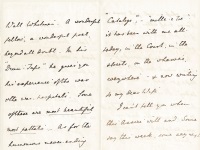 In some manuscript notes, probably intended for a lecture to the London Positivists, Lushington argued that Whitman's poetry had arrived at the same truths as Comte's philosophy even though:

"Whitman, so far as appears, has never heard of Positivism, never read a line of Aug. Comte: his testimony, such as it is, is therefore wholly spontaneous, moreover, it may be said at once that he is not a Poet of Positivism, far from it." 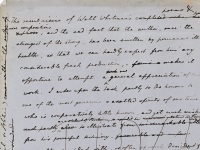 An ardent follower of Comte, Lushington decided to write to Whitman and an incomplete draft letter in the archive opens:

"My interest in … your bold noble hearted poems induces me to write you this letter – my object is to introduce to you a System of Philos[ophic] belief & practical action with wh[ich] if I mistake not, you are at pre[sent] unacquainted. I mean Positivism."

There is no reply from Whitman in the archive. However, the contact between Lushington and Whitman was significant as was Lushington's role in making the poet known in England.

David Taylor's article, 'Walt Whitman and Comte's "Religion of Humanity". New Discoveries in a British Archive' will be published in The Times Literary Supplement, 24 May 2019.