"We were naturally gratified by the excellent attendances... the best for a great many weeks... Exactly 72 people left... only 2 of these were moved to real anger or annoyance at the play. These two people... engaged the producer in a long discussion about the play. They then asked the way to the nearest Saloon Bar to which, with infinite tact, they were directed."

The establishment of England's first repertory theatre at the Gaiety Theatre, Manchester, in 1908, led to a radical and popular shift in theatrical production, which was to be imitated by groups springing up around the country. The turnover of shows was extraordinary: plays were produced on a weekly basis, with actors playing to full houses in the evenings whilst rehearsing the next week's show during the day.

The earliest and smallest of Surrey's main post-war repertory theatres was established almost by accident in 1939. The English Classical Players' European tour was cut short by the outbreak of war and the actors decided to make their base in Farnham. The Castle Theatre was officially opened in 1941, and operated as a weekly repertory theatre. Eventually Farnham Repertory Company outgrew its premises and moved to the newly-built Redgrave Theatre in 1973. Both Farnham theatres were highly regarded for their Theatre in Education work and youth and community theatre. After a decade of financial struggles, the Redgrave Theatre closed in 1998.

Claud Powell and Mrs Dorothy Owen established the Guildford Repertory Company in 1934. The amateur company performed at St Nicholas Hall, Millmead Terrace, Guildford, until it was disbanded in 1941. 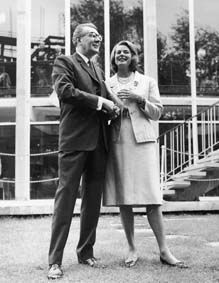 The Yvonne Arnaud Theatre, Guildford, is the largest and sole remaining producing theatre in Surrey. It began life as the Guildford Theatre Company (GTC) in 1946. During the 1950s, the second artistic director, Bryan Bailey, widened the GTC repertoire to include new works by playwrights such as Arthur Miller, Eugene Ionesco, Peter Schaffer, Sean O'Casey and Samuel Becket.

When Guildford Theatre burnt down in 1963, plans were already being drawn up for the new Yvonne Arnaud Theatre, which eventually opened in June 1965. From the start, this theatre had a strong West-End bias. Many famous actors have appeared there including Michael Redgrave, Ingrid Bergman, Dame Sybil Thorndike, Dirk Bogarde, Helena Bonham Carter, Colin Firth, Felicity Kendal, Paul Eddington, Derek Jacobi and Zoe Wanamaker.

In 1951, Hazel Vincent Wallace (1919-2019) founded the Leatherhead Theatre Club (LTC) in the former Ace Cinema on the High Street as a permanent base for the London-based Under Thirty Theatre Club she had established in 1948. Early stars included Vanessa Redgrave and Nyree Dawn Porter in panto together, Carmen Silvera, Leonard Rossiter and Richard Briers. 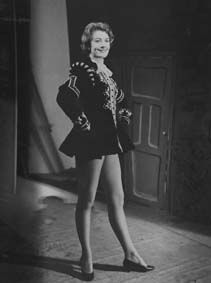 In the late 1960s, fund-raising for a new theatre to accommodate the rising audience numbers was given a boost when Dame Sybil Thorndike agreed to lend her name to the project. The Thorndike Theatre, designed by Roderick Ham and now a listed building, provided the template for the modern arts centre.

The Thorndike continued to branch out during the 1970s and 1980s. Under the creative direction of Joan Macalpine, the Thorndike Young Stagers performed new musicals based on local themes. The Young People's Theatre Section took productions into schools and ran summer workshops and festivals; while the Casson Company staged plays by new playwrights in the Casson Rooms.

By the late 1980s, the theatre struggled to overcome its financial difficulties by playing host to touring companies. The Sir Peter Hall company briefly used the Thorndike as its regional base and Bill Kenwright took over the whole enterprise in 1990. Unfortunately, this wasn't enough to save it and in April 1997, the Thorndike Theatre was forced to go into liquidation and close.

Film footage of the construction and opening of the Thorndike Theatre (SHC ref F/83) can be viewed on the Screen Archive South East website.