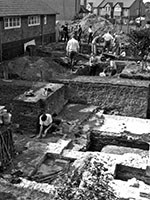 Oatlands Palace was created by Henry VIII, on the site of an earlier manor house dating back to the late 13th century. The site was originally acquired by Bartholomew Read, a wealthy London goldsmith, soon after 1478, who created a brick-built courtyard house within a moat. This substantial house formed the core of the privy court (the royal apartments) of the Palace that Henry VIII created between 1537 and 1544. Henry's plans for the house evolved in stages, with development initially largely confined to the moated site. The moat was subsequently drained, and a middle court (with substantial ranges of accommodation) and an outer court (including the kitchen, buttery, and other offices), built in front of what became the privy court. Oatlands was primarily the queen's palace, forming part of a group within the Honour of Hampton Court, with Hampton Court (the king's palace) and Nonsuch (the prince's palace). 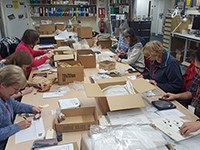 Henry VIII and his queens made considerable use of Oatlands as did subsequent monarchs. The Palace was demolished following the Civil War in 1650, leaving only a wall of the outer court standing. Research excavations began in 1968 to establish the exact site of the vanished buildings, their plan and their development. This work continued intermittently until 1973 and was followed by rescue excavations when the housing estate that covered part of the site was redeveloped in 1983 and 1984. The most interesting finds from the excavations come from a series of garderobes (lavatories), containing material of the 1640s. When the Palace was demolished these were sealed with rubble, providing a precisely dated time capsule of Palace life. 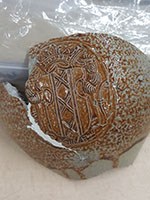 Elmbridge Museum held a large archive of finds, index cards and paper records relating to the excavations, but in 2019 these were temporarily moved to storage with Surrey County Archaeological Unit (SCAU) with the aim of bringing the archive up to meet modern standards. This includes re-bagging artefacts, digitising index cards and cataloguing the archive. Volunteers began work in January 2020, supervised by professional archaeologists from SCAU, and between January and March 430 hours were volunteered re-packaging finds for Oatlands Palace Archive Project, with a further 40 hours digitising the index cards and catalogue. With the announcement of lockdown, work moved online, with volunteers transcribing 40 documents about the development of the Palace from home. These documents included a wealth of information, including names of the workmen who built the Palace in 1537 and a detailed inventory of Catherine Howard's apartments following her execution in 1542. 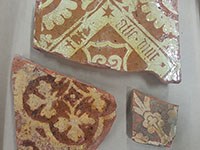 Work at the History Centre on the finds archive continued throughout 2020 when Government restrictions allowed, and to date volunteers have repackaged 95 boxes of finds, with 90 still left to do. The boxes have contained countless fascinating artefacts, often stored in old tins, matchstick boxes, and paper bags and wrapped in disintegrating cotton wool. Once the project is complete, the archive will be returned to Elmbridge Museum, preserved for future generations.

More information about the project can be found in the Excavations at Oatlands Palace publication, available to purchase from Spoilheap Publications or on the Surrey Heritage online shop.