The Medieval and post-Medieval development of Reigate Priory

A programme of works for the regeneration of Priory Park, Reigate, was preceded by geophysical survey and trial trench evaluation, and accompanied by numerous interventions (all small-scale, with one exception) in the form of watching briefs, test trenches and sample excavation. The cumulative effect of these has been to produce a substantial body of important information on the medieval priory and its post-dissolution successor mansion, and this is synthesised by the present report, which also presents the results of several other archaeological interventions in the same area. 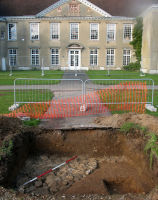 The earliest remains may be the substantial foundations of a large building that is suggested to have been a hospital. This lay next to Bell Street, the principal medieval access to the site, but the small, but typical, cloistral layout lay to the west. There is some indication that an early layout of this, perhaps contemporary with the hospital building, was superseded by a more substantial complex on the same site. The enlargement may have happened with the change of status to a regular priory in 1298. The church lay to the south of the cloister, allowing the latter to take advantage of a stream to the north. Other parts of the priory complex identified include possible lodgings for the prior and parts of the precinct wall. 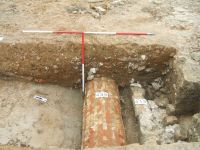 The priory was dissolved in 1536 and soon after granted to the Howard family. The conversion of the main priory building was at first closely based on the structures that preceded it. Further changes may have been quite limited and piecemeal for well over a century, but its acquisition by Sir John Parsons in 1681 led to a more comprehensive programme of redevelopment, affecting both the house and landscaped grounds, and a plan of c1770, supported by the archaeological evidence, shows the end result of this. Both the Priory house and the gardens were extensively altered in the late 18th and 19th centuries.