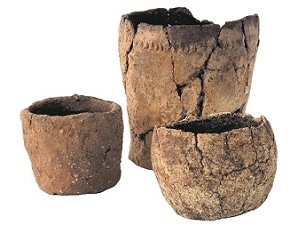 and 2014, and revealed the development of a landscape through ten millennia.

An array of Mesolithic tree-throws and purposefully dug pits was identified in the areas surrounding the enormous flint scatter that lay within a valley hollow. It is unclear whether intensive usage ceased with the last of the Mesolithic hunter-gatherers, but much flintwork of Neolithic date, deriving from once intact surface scatters, was recovered, as well as an important feature with placed deposits of Peterborough Ware vessels. Such ritual activity may be continued by Bronze Age cremations and a probable ring-ditch, but the evidence of scattered features and flintwork also points to more regular agricultural activity and settlement at that period.

Important and rare evidence of Early Iron Age ironworking was identified but there was little later Iron Age or Roman usage of the locale. There was a greater amount of earlier Saxon occupation, indicated by a well and a number of pits.

In the early medieval period, trackways and a field system, integrated with discrete areas of industrial and domestic activity, were developed. The eastern side of this regularly divided landscape was marked by a green lane. Several roadside ditches for the green lane were identified during the excavations. It seems likely that this route had been used from the Bronze Age onwards (perhaps even as far back as the Mesolithic period), as part of the seasonal relocation of livestock and settlement, linking the North Downs and the Weald. The fields and settlements were obliterated with the creation of the North (deer) Park, probably in the later 12th century.

The archaeological work took place intermittently over a 17 year period and some of the interim reports are available in the digital supplement, documents below, to provide further detail to the published report.