Two excavations in Fetcham, one at Cobham Road, in the valley close to the river Mole, the other on high ground at Hawk's Hill, revealed a rich variety of evidence for its early history. The earliest discoveries were of a Late Upper Palaeolithic or Early Mesolithic site in the valley, where hunter-gatherers had stopped to knap flint to make or repair hunting equipment. This type of evidence is extremely rare with few parallels regionally, or even nationally. An area of Late Mesolithic flintwork was also encountered and is likely to indicate a temporary camp for similar purposes. Neolithic, Bronze Age and Iron Age features and finds were also made, in both locations. 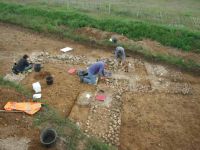 The remains of a Roman building, consisting of flint wall foundations, were also identified, with flue tile above suggesting an association with a bathhouse. Pottery suggests that activity began in the middle of the 2nd century and extended to the later 4th century. A Roman villa in a river valley is unusual in Surrey. Pottery from the hilltop also indicated a nearby Late Roman settlement. 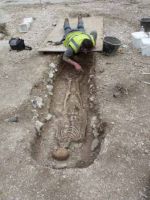 This pottery had become incorporated in the fills of 18 Saxon graves. The burials are of 7th century date, and formed part of a much larger cemetery on Hawk's Hill, parts of which have been previously revealed. No settlement was found associated with the cemetery, but Saxon pottery and a posthole at the villa site may indicate an area of occupation that could be related, and/or perhaps also point to continuity with the Roman occupation.