Cycling is permitted on most roads (highways), byways and bridleways, as well as dedicated cycle tracks.

Our cycle facilities map shows where improvements for cyclists have been made to our network.

We know that cycling on our network can, in places, be difficult, so we are constantly working to introduce infrastructure that is designed to make cycling easier, safer and more enjoyable. Such infrastructure is referred to as a cycling facility.

Many search engines, journey planners and mobile apps can help you identify the best route for cycling a journey.

When on the street, signs can help you follow routes recommended for cyclists to prominent destinations.

You may also find it helpful to view the aforementioned cycle facilities map.

Some longer-distance cycle routes, town networks and leisure trails have names and distinctive signage, to make them easier to follow.

Avenue Verte is a route between London and Paris, which passes through the east of Surrey. Within Surrey, it follows the same route as National Cycle Routes 20 and 21 (see below).

This leisure trail runs from the northwest edge of Guildford (at Applegarth Avenue) to the east side of Farnham (at Shepherd and Flock roundabout). The trail is 8.5 miles long and runs along country paths and some quiet lanes. There is a busy road to cross towards the Farnham end. The trail has signs that incorporate a Christmas pudding logo.

The Downs Link is a traffic-free trail linking the North Downs Way (near Guildford), the South Downs Way and the sea at Shoreham-by-Sea. It mostly follows the line of a disused railway and as such makes for easy and safe cycling. The whole length is about 37 miles, but it can be cycled in sections and is particularly well suited to families. There is a signed 2 mile link from Guildford town centre to join the trail near Peasmarsh (following National Cycle Routes 22 and 223).

The surface is not tarmac, but it is firm and generally well-drained, and there is a continuous programme of maintenance. The trail is suitable for all types of off-road bicycle but can also be ridden quite comfortably (especially the Surrey section) on a touring or hybrid bike. However, note that the northernmost section of the Downs Link from the North Downs Way at St Martha's Hill until you join the old railway line just north of Bramley is, in places, unsurfaced and steep, and is more suitable for people used to mountain biking. For 'family-friendly' access, we recommend you start on the old railway line where it joins the A281 opposite Trunley Heath Road, just south of Shalford.

Route 4 links London with Fishguard in West Wales. In Surrey, this route follows the Thames Valley, running through Staines, Weybridge, Walton-on-Thames, Chertsey and Molesey. It connects with National Cycle Route 223 in Chertsey.

Route 20 begins in Wandsworth in London and ends where it meets National Cycle Route 21 in Surrey, just east of Merstham. It passes through Chaldon.

Route 21 connects Greenwich in London to Eastbourne on the south coast. In Surrey, it passes through Warlingham, Woldingham, Redhill, Earlswood, Salfords and Horley.

Route 22 is being developed to connect London with Portsmouth, the Isle of Wight and the New Forest, passing through Surrey on the way. In Surrey, the route takes in Farnham, Puttenham, Compton, Guildford, Shalford, Bramley, Gomshall, Westcott, Dorking, Headley and Banstead. It links to National Cycle Route 20 to the east of Banstead, and shares the route between Guildford and Bramley with National Cycle Route 223.

Route 221 follows the Basingstoke Canal between Pirbright and New Haw, through Woking town centre, where it links with National Cycle Route 223. Much of this route is also referred to on local signage as the Saturn Trail (part of the Planet Network in Woking).

The network is well-signed and easy to follow on the street.

The Planet Network has proved popular and well-used since its introduction, and we are now looking to invest further in existing routes and to add new routes as part of our plans to improve walking and cycling.

Round the Borough is a circular tour of the Borough of Epsom & Ewell, taking in Epsom Downs, Nonsuch Park, Epsom Common, the Hogsmill River and Horton Country Park. 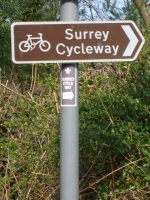 The Surrey Cycleway is a 94 mile circular tour around the county. The route typically uses quiet country roads and lanes and is well signposted. The route is marked by distinctive brown and white signs. It is suitable for people who have some experience of cycling on roads.

Apart from the main loop there are a number of 'links' which enable you to do shorter circuits. There are also links to major towns in Surrey (such as Epsom, Woking and Farnham). These links are identified by signs with the words 'Surrey Cycleway Link' on them. While the total distance is 94 miles, there are many more leisurely short routes. The shortest and flattest route is between the Outwood link and the Leigh link this is only 9 miles long.

The Yew Tree Way is a circular cycle tour in south east Surrey around Lingfield and Hurst Green. It is 15 miles long and follows quiet country lanes. Accessed via railway stations at Hurst Green and Lingfield, the route can be shortened by using the rail link between the two stations. The route is on-road throughout so some experience of cycling on roads is necessary. Wooden way marker posts are provided for cyclists following the route in an anti-clockwise direction only.

How is the network used?

We undertake surveys and monitoring across our network to understand how it is used. At some locations, automatic cycle counter devices have been installed to continuously remotely monitor how many cycles use a road or path.

All survey locations can be viewed using the Surrey Interactive Map.