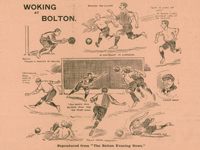 Local newspapers can provide researchers with a real connection to the past; the impact and currency of the reporting helps to create a sense of the time in which they were created. The scope of the local press is wide-ranging, from sensational news stories about local crime and disaster to the local economic situation. Reports from official bodies such as local authorities and councils, reports of Crown and Magistrates Courts, social events such as weddings and funerals, together with cultural events such as theatre productions, football matches and local fêtes, all mingle in vibrant pages of the local press to help the modern researcher to build a vivid impression of the period they are researching. In some cases the local newspapers provide the only source of information about an event or individual.

The earliest provincial newspapers drew their news stories, both national and international, from the London papers. Throughout the 18th century, local papers began to include reports of more local events, but any major national or international stories would push out the regional coverage. Advertisements and public notices form the bulk of the local content at this time. Early newspapers were heavily taxed during the 18th and early 19th centuries, and were stamped with the amount of duty paid. These early papers were usually printed on two sides of a single folded sheet.

Publishers of local newspapers relied on a network of local correspondents to report anything of local significance, so coverage was variable: for example, a list of contributors for each area can be found below the masthead of the Sussex Agricultural Express. From the mid-19th century, local news took up a greater portion of regional newspapers and they began to be the voice of the community they served. The development of town-specific newspapers such as the Woking News and Farnham Herald during the late 19th century is indicative of this change. In addition, the abolition of stamp duty in 1885 contributed to the growth in local as well as national titles.

Illustrated advertisements begun to appear from the 1730s; the engraved blocks were frequently reused year after year. The advertisements for coach services and later railway services were often enlivened with delightful images of the latest vehicles, and provide a useful insight into timetables and prices of transport. By the 19th century, advertising had become an industry with the power to dictate newspaper's content and political bias. Products such as Cadbury's Cocoa, Beecham's Pills, Pears Soap and Player's Navy Cut were advertised nationally. Printing blocks were produced centrally and distributed to the London press and provincial newspapers.

Sadly, illustrated news stories are rare before the advent of photography although from the mid-19th century, journals such as the Illustrated London News (1842) carried wood engravings. Photographs begin to be used from about 1900, initially studio photographs of local politicians or businessmen. The roving photographer taking pictures of newsworthy events did not emerge until the 1930s. The changes in print technology in the 1990s mean that the local newspaper of today, lavishly illustrated with colour pictures and advertisements, looks very different from those of the early nineteenth century. In recent years, the growing trend towards digital editions or entire digital newspapers may signify changes to the style and coverage of local events and have an impact on the ways researchers use newspapers in the future.