The Festival of Britain celebrations in Surrey 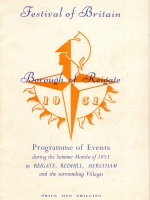 This year (2021) marks the 70th anniversary of the Festival of Britain which took place 100 years after the Great Exhibition of 1851 in Hyde Park. The Festival of Britain was conceived as a cultural celebration and a 'tonic for the nation', one that was still recovering from the scars of the Second World War, and whose people were still experiencing rationing and austerity. The Festival opened to the public on 4 May 1951 and closed in September.

The main Festival sites were in London, on a 27-acre area on the South Bank of the Thames, and at Battersea Pleasure Gardens. However, the Festival was not just a London-centric affair, as proudly declared in the introduction to the Reigate Borough programme of Festival events (SHC ref 6345/file1):

"But this is a Festival of BRITAIN and not of London only, consequently in towns and villages all over Britain special attractions are being arranged such as Exhibitions, Carnivals, Pageants and Sporting events of all kinds. It is hoped that these will encourage holiday makers to see more of their own country this year, as well as provide an opportunity of demonstrating to visitors from abroad the enthusiasm of the British people both at work and at play in a strenuous effort to live through these troublesome times, and to recover from the devastating effects of the war years." 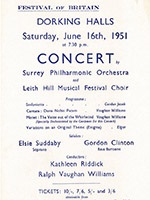 Reactions to the Festival were mixed. Along with records of enthusiastic participation, there are letters of opposition to the costs involved and religious objections to events taking place on Sundays. The 'Dorking and Leatherhead Advertiser' of 24 March 1950 reported that the Festival was discussed at the Surrey County Music Association AGM. Dr Ralph Vaughan Williams warned of the danger of overdoing the events, stating that the most important way to celebrate the Festival was to continue what societies were already doing but to do it better and more strenuously. Interestingly, a special Festival of Britain concert of Vaughan Williams's work, and conducted by the great man himself, was performed at Dorking Halls in June 1951!

In February 1950, the 'Surrey Mirror had asked, 'Will Reigate be the centre of the 1951 Festival of Britain celebrations for the whole of the county of Surrey?' The Mayor of Croydon, with the support of the Lord Lieutenant of Surrey, had suggested that 'instead of several small efforts in different places, there should be one big festival show for the whole of Surrey'. Croydon, Reigate and Guildford were each mooted as the main site. 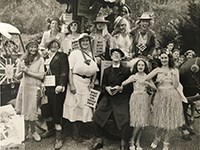 As it transpired, Festival celebrations took place in many different towns and villages across the county, led mainly by the various borough, district and parish councils. Records in our collections chronicle the hard work of special committees set up to discuss, promote and deliver local activities to celebrate the Festival. The Esher Urban District Council programme of Festival of Britain events (SHC ref 6304/box4) promoted an assortment of activities that included special Cobham and Molesey weeks with sports tournaments, a variety concert, exhibitions and a baby show. There was also a regatta at Thames Ditton, a garden fete at Esher Rectory, a village fair at Stoke D'Abernon and a grand pageant at Hampton Court. 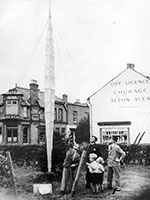 An official photograph album was commissioned by Caterham and Warlingham UDC to commemorate the busy programme of Festival celebrations in the district (SHC ref 3385/1/117). Along with photographs of the May Queen, various sporting events and a gala dance is a delightful image of the carnival with residents in fancy dress, clearly having a good time!

For its Festival of Britain celebrations, Badshot Lea went one step further and erected its own Skylon, and we have a photograph of a small group of residents, including the Reverend Atkins, looking proudly at their creation (SHC ref 7146/2/5). The original Skylon, on London's South Bank, was a futuristic-looking, cigar-shaped steel latticework structure which gave the illusion of floating above the ground. At the time, it was likened to the British economy as 'having no visible means of support'. 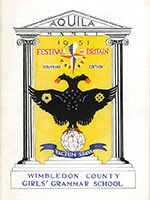 Among the Aquila school magazines of Wimbledon County Girls' Grammar School is a special souvenir Festival edition (SHC ref 7640/1/31), with messages from the Mayor emphasising 'faith in the future', a letter from the Chairman of the Education Committee focusing on past achievements, and a patriotic Festival of Britain poem written by Ann Voller (Form V).

As part of Woking's Festival of Britain celebrations, a group of 17 teenagers from Displaced Person's Camps in Germany was invited to stay as guests of the district. Initiated by Woking schoolteacher, Joyce Pearce, the holiday was funded by the district council, local organisations and individuals, with the visitors staying at Miss Pearce's home, Ockenden House. Several albums in our collections (SHC ref 7155/3/1/-) record the holiday which received much publicity and which, importantly, was the catalyst for the founding of the refugee charity, the Ockenden Venture. 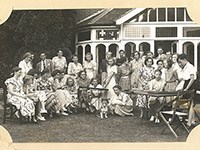 The many planned events and activities across the country appear in provisional catalogues issued by the Festival of Britain Liaison Branch (SHC ref 3858/1/8). Among the listings for Surrey are a gala festival week (with pageant under consideration) in Guildford, a cricket festival in Kingston-upon-Thames, an essay competition for schoolchildren in Leatherhead, and an industrial exhibition in Merton and Morden. Although not all of these activities came to fruition, a good many did, as the sterling efforts of local authorities, organisations and individuals in organising Festival celebrations are clearly recorded.

So, 70 years on, was the Festival of Britain an ill-timed waste of public money? Or was it an opportunity for communities to pull together to offer a temporary escape from the woes of the post-War years, with hopes and dreams for a better future?