Over the last 20 years the British Museum's Portable Antiquities Scheme (PAS) has allowed finds made by metal detectorists in Surrey to be added both to the national database and the county's Historic Environment Record (HER). Any groups of coins, groups of prehistoric metal objects or individual precious metal objects over 300 years old have also been required to be reported to the Coroner under the 1996 Treasure Act. This reporting process is undertaken by the county's Finds Liaison Officer (FLO). The purpose of the Treasure Act is to provide museums with the chance to save important finds before they are lost to commercial auctions and to preserve them for local communities and public collections. Finders and landowners receive full financial reward for everything acquired as part of this process. 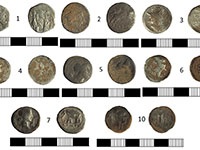 One recent discovery from Surrey which has been reported under this law, is a hoard of 28 silver Roman coins (denarii), found dispersed across a small area of equestrian pasture in the Elstead area (recorded as SUR-EA4D41 and SUR-0E4DC2). The coins were most likely originally buried in a bag or box which has long decayed and released its contents to be scattered by ploughing. These coins represent an unusual and significant find for the county and after being declared Treasure at Coroner's Inquest were acquired by Godalming Museum, with financial assistance from Surrey Archaeological Society, Council for British Archaeology South-East and the V&A Purchase Grant Fund. 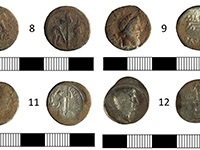 The coins range in date from an early Republican denarius dating to 136 BC (item 1, first photograph) to a denarius of Claudius as emperor, dating to AD 41-42 or later (item 16, third photograph). The coins are highly diverse and present a veritable rogues gallery of famous faces from the later Republican and early Imperial period, including Pompey Magnus, Julius Caesar, Mark Antony, Octavian / Augustus, Tiberius and Claudius (second and third photographs). The heavier degree of wear on the earlier Republican coins suggests contemporary circulation with the Imperial issues. The date of actual deposition is most likely around the time of the Claudian invasion which makes this hoard quite a rare thing; hoards from this specific period comprise less than 1.5% of all hoards recorded nationally. 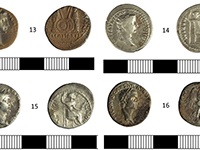 Few repetitions of any particular issue or ruler are represented in the group. This is unusual and perhaps suggests the result of a process of deliberate selection, rather than merely a gathering together of the owner's wealth. In addition (and unlike in contemporary assemblages such as from the temple at Wanborough), there are no Iron Age or early British coins. This could suggest that the owner only had access to Roman coins or perhaps was only interested in hoarding Roman coins. Was this then a curated group with some social meaning above and beyond the purely monetary value? Could it even be seen as a coin "collection", in the modern sense, rather than just a random assortment of coins which the owner happened to have saved up for a rainy day? Such questions defy easy answer.

At the time of the hoard this area of Surrey was sparsely populated and not agriculturally productive. There were no associated artefacts or structures. The county HER records no contemporary sites in the immediate vicinity, with a small number of pottery scatters and isolated finds further afield testifying to low key regional activity. There is also little evidence for any military presence so direct association with the invasion of AD 43 would seem far from clear – nevertheless, perhaps the simplest interpretation is of a soldier's pay concealed in the aftermath of the military activity. Whatever the motivation, it seems that the hoard was deposited in an isolated area, with few people living and working nearby. This isolation may have offered a sense of security to the owner, who for whatever reason, never returned to collect it.