The Duke of York marches on London, September 1450

The road to Civil War 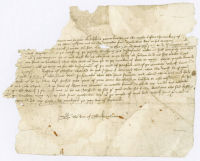 This sorry looking document (LM/COR/1/19) is badly damaged, scuffed and does not even relate to Surrey. But appearances are deceptive. It is the earliest letter in our holdings that can be precisely dated and it is also one of the very earliest documents we hold written in English.

But its interest stretches far beyond that. It is an eyewitness account of a key event in the build-up to the outbreak of the Wars of the Roses. It was written on 21 September by Humphrey Stafford, Duke of Buckingham, from his Castle at Maxstoke, Warwickshire, to William Beauchamp, Lord St Amand, and describes Buckingham's encounter with a man, whose name is missing, who is marching towards London with a small army at his back (3-400 according to the letter). Buckingham, faithful to the feeble King Henry VI, reports to St Amand that this man says, "he is and woll be as obeisant to the Kyng oure soverain lord as his trewe liege" (fifth line).

This news would be a welcome relief to the royal court: the man is almost certainly Richard Plantagenet, Duke of York, a popular hero with a strong claim to be heir to the (then) childless king; the year (also missing from the letter) must be 1450, when Henry's regime had been rocked to its foundations by the exile and murder of his chief minister the Duke of Suffolk, the loss of Normandy to the French and rebellion in Kent.

Though on this occasion York and the King kissed and made up, in 1452 the frustrated Duke tried again to force his way into Henry's inner circle and, in 1455, the first battle took place in a conflict that was only really settled in 1487. Within ten years writer, recipient and subject were all dead. St Amand died peacefully in 1457, but Buckingham perished defending his king at the Battle of Northampton in July 1460 and at the end of the same year York was captured and executed by royal forces after the Battle of Wakefield.

The second half of the fifteenth century is a period brought vividly to life in the famous letters of the Paston family of Norfolk. Those letters are so celebrated because so little personal correspondence, commenting on local and national events, survives before the Tudor period. This letter of the Duke of Buckingham letter was only identified recently among the Loseley Manuscripts and we have discovered no connection between the Mores of Loseley and Lord St Amand to explain how a letter he received should have found its way into their papers. However, what we can confidently say is that, as an original letter between and about key players in the great crisis of the fifteenth century, this document is of the utmost rarity.

If you would like to read more about the letter it is featured in an article by Ralph Griffiths entitled 'Richard, Duke of York, and the crisis of Henry VI's household in 1450-1: some further evidence' in Journal of Medieval History, 2012.