Seals among the deeds of the Leigh-Bennett family 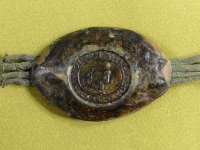 Wax seals, attached to documents to authenticate them, are among the most attractive objects a local archives might hold. Often beautifully designed and lettered, they can tell us much about how the owner of the seal wished to present themselves. Unfortunately seals are also incredibly vulnerable. As the wax dries and hardens it becomes more brittle and as the centuries pass so a seal deteriorates and fragment until all that is left is a formless lump or stain on the tag or cord that attached it to the parchment.

The deeds of the Leigh-Bennett family (SHC ref 2609) are particularly rich in seals, including some very early ones, and in this Marvel I will look at four. The Leighs (as they were until the 18th century) built up a significant estate in Addington south of Croydon and in north-west Kent, rising through the social ranks as they did so. 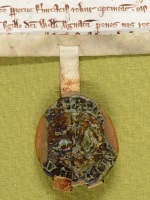 In 1544, Nicholas Leigh agreed with Henry VIII to exchange certain lands he held in Headley for the manor and advowson of Addington Rectory, in the king's hands after the dissolution of the Augustinian priory of St Mary Overy in Southwark. With the Rectory were transferred the deeds dating back to the 12th century which documented all the grants of land in Addington made to Southwark Priory by numerous pious benefactors for the salvation of their souls. Three of the seals relate to the Rectory estate.

Between 1175 and 1184, Bartholomew de Chesney bestowed Addington church itself on the priory, a grant which was confirmed by the Bishop of Winchester, Richard of Ilchester (2609/11/3/1). The Bishop's confirmation still has his seal attached, with an image of him in his episcopal vestments. Interestingly on the back of the seal is another impression, which looks like it was made by the Bishop's ring. In the centre there appears to be an antique gem, engraved with a seated figure receiving an offering. The Latin inscription reads 'I am the keeper [and?] head of the seal'. 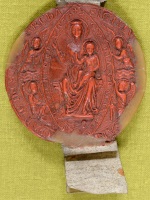 In the 1240s, the priory granted houses and land in Addington to William de Ora, son of Edward. The deed (2609/11/2/3) bears a battered green seal, with the equestrian image of a fully armoured knight, with shield and cylindrical helmet. The damaged inscription names the knight as William de Ba[..], which seems to contradict the wording of the deed.

In 1353, the Priory manumitted (or freed) a serf called William de Tottenham who had served it faithfully as bailiff of its rectories of Banstead, Addington and Tadworth. The grant was made in the Chapter House at Southwark and still carries the magnificent conventual seal in red wax (2609/11/3/2) bearing the striking image of an enthroned and crowned Mary with Christ on her knee, supported by four angels.

The last seal relates to another property granted by Henry VIII to Nicholas Leigh in 1544. The estate of Addington Temple was granted to the Templars, an order of crusading monastic knights pledged to defend the Holy Land, in 1241. The Templars fell from grace and the order was abolished by the Pope after which its numerous properties were transferred to another crusading order, that of St John, also known as the Hospitallers. In 1377/8, Brother Robert Hales, Prior of St John Jerusalem in England, and the convent at the order's headquarters in Clerkenwell, leased their newly acquired Addington estate, with its grange, gatehouse, cheesehouse and granary, to Richard atte Lee, an ancestor of Nicholas Leigh, for 15 years at a rent of 12 marks a year. The rather stained and damaged lease (2609/11/3/4) still carries the black seal of the order with the impressive image of the shaggy head of St John the Baptist.

All these seals, which have somehow survived through many centuries, have been skilfully repaired by our conservators and are now packaged and stored in such a way that they can be enjoyed by generations to come.