The history and conservation of seals 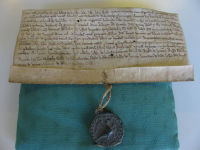 A seal is used to authenticate or validate a document in place of, or alongside, a signature. Seals have a long history going back to the earliest civilisations. One of the first examples of an official seal used by an English king is that of Edward the Confessor (c.1042-1066). Amongst Surrey History Centre's archives is a fine seal on a 12th century deed of gift by John de Burstow (SHC ref 3128/1). In later centuries, seals were also used for sealing closed envelopes or letters of importance.

The seal-making device, known as a matrix, is engraved with a negative image. The matrix is pressed into a soft material - clay, wax, resin, paper - to produce a positive impression. 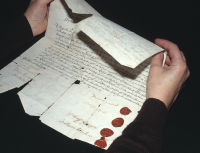 There are two main ways in which a seal is attached to a document. It may be applied directly to the face of the paper or parchment document (applied seal); or it may hang loose from the document attached to a narrow paper, parchment tag or chord (pendant seal).

Early European seals were generally made of beeswax. Later a more hardwearing compound of beeswax and vegetable resin was used. Shellac, an animal resin, later superseded the use of the wax seal because of its mechanical strength, resistance to abrasion, and good adhesion suitable for applied sealing. However traditional wax seals are sometimes still used on certain high-status and ceremonial documents.

Seals are easily damaged, mainly by poor storage and handling. Pendant seals often become chipped or fractured with the tag or chord split and torn. Applied seals become cracked and brittle. Dust and dirt are a problem for wax seals as the surface is soft and the dirt can abrade the surface and damage the impression. A seal can also suffer from biological and chemical attack which may alter its physical appearance and structural makeup.

In the Surrey History Centre conservation studio, damaged seals are cleaned and repaired. The cracks and missing areas are repaired with a mixture of unbleached beeswax and resin. The mixture is heated to a temperature high enough to flow into cracks, re-mould missing areas and reattach fragments. The repair wax must be low enough to avoid damage to the original; this is very skilled and precise work. Damaged paper tags used to attach pendant seals are repaired using strong, flexible Japanese papers and parchment tags with new sheepskin parchment.

Seals need particular protection because of the risk from fracture and abrasion. A bag used as a protective pad, made from polythene and cellulose or natural fibre, is made to fit the actual size and shape of the seal. A box lined with acid free material is used to protect the document and support the weight of an attached pendant seal. It is important to save and protect these fragile and often beautiful objects as they contribute to our rich heritage in their own right.