During the First World War just over 1,800 men from The Queen's Royal West Surrey Regiment became prisoners of war. By the spring of 1915 about 450 men from the two regular battalions were known to have been captured in the heavy fighting during October and November 1914.

Mrs Christabel Elias Morgan, the wife of the Commanding Officer of the regimental depot in Guildford, wrote to the press in March 1915 pointing out the many of these men were not receiving any parcels while others received several per month from friends and families. They would often send inappropriate items which might spoil or be broken in transit, be badly packed, or appear on lists of prohibited items.

Mrs Morgan asked for people to adopt a soldier and send money to the regimental relief fund, allowing food, toiletries and comforts to be bought in bulk. These items were then packaged at the depot and shipped abroad. As the war progressed, what was allowed in the parcels became standardised, and a label showing the contents was fixed to the outside of the wrapping, so reducing the need for cross-border custom checks.

When Colonel Elias Morgan retired in 1916, the running of the fund passed to the widow of Colonel Dawson Warren for the rest of the war. The names of prisoners of war were recorded in a ledger along with the names of their 'adopters' and how much money they sent. The ledger also indicated if the prisoners were sent cigarettes and bread; depending on their location, bread would be sent from either Denmark or Switzerland. The ledger would also record the prisoner's next of kin, where he was held and what happened to him. 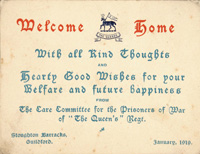 Please see our Military records indexes for an online index to the Queen's Prisoner of War Ledger (SHC ref QRWS/1/3/1).

Invitation to the 'Welcome Home Party' from the Care Committee for the Prisoners of War of the Queen's (Royal West Surrey) Regiment, Jan 1919. SHC ref QRWS/30/EDWAE/7