Nursery records held at Surrey History Centre include those of Waterer's (Knap Hill and Bagshot Nurseries), Slocock's (Goldsworth Nursery) and Jackman's (at St John's), as well as those of several smaller nurseries.

During the nineteenth century and into the twentieth century, west Surrey, particularly the area around Woking, became known world-wide for its nursery gardens. The easily worked sandy soils and good rail communication with London made it an ideal site for raising plants to meet the ever-rising demand for plants to stock the new suburban gardens. Work on the hybridisation of plants at the Surrey nurseries gave rise to many new varieties suitable for garden use - particularly rhododendrons (at Waterer's nurseries in Knaphill and Bagshot and at Goldsworth Nursery in Woking) and clematis (at Jackman's Nursery in Woking).

Here we show a page from a memorandum book of George Jackman (SHC ref: 1216/3/1). His hybridisation of clematis in the late 1850s led to the introduction of the now well-known clematis, Jackmanii. His notes of July 1858 show him crossing clematis lanuginosa with clematis viticella Hendersonii and clematis atrorubens to produce 'very robust growers, abundant in flower of rich deep purple and maroon'. A further cross in 1862, involving the finest of the seedlings produced in 1858, led to 'robust growth, good flowers of large size, grayish lavender – fine', the plant which was to be named Jackmanii, the first of the modern large-flowered hybrid clematis to be grown in gardens.

The group photograph above (SHC ref: 1216/14/2) shows 18 gardeners and two boys who worked at Jackman's Nurseries in the 1880s. The principal foreman carries a measuring rod as staff of office. The nursery at that time was situated around the old family home of 'The Hollies' at St John's, Woking. Such was the success of the business that, from 1885, 300 acres between Woking and Mayford was also brought under cultivation. 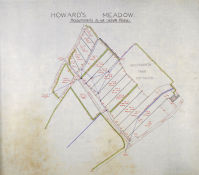 The plan (SHC ref: 7562/5/21) dates from the early twentieth century and shows a field at Walter Slocock's Goldsworth Nursery (where Goldsworth Park now stands). The plan shows the division of the field into separate plots to be worked. Slocock, who had worked in the nursery business from about 1860, initially working for Anthony Waterer at the Knap Hill Nursery, had purchased the nursery in 1877. He considerably expanded the nursery and used a 'contract' system to work it. Each worker was assigned particular plots and was responsible for every aspect of cultivation on that plot (fertilising, weeding, grafting, ditches, etc), being paid according to yield.