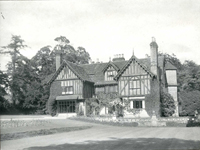 One fascinating item that came to Surrey History Centre in 2010 is an 1827 bill for an order of plants, seeds and tools from John Mackay of Clapton Nursery, London, to M Hutchinson, gardener at More Place, Betchworth (SHC ref 8677/1).

This document will be of particular interest to the keen gardeners amongst us and also to local historians in light of the fact that there were quite a few nurseries in and around the Woking area from the mid 18th century onwards. The owners of these nurseries were all initially inspired by the easily worked soil and by ease of access to the London markets - the new suburban houses all wanted plants for their gardens. Varieties of plants particularly specialised in by these local nurseries included rhododendrons, clematis, azaleas and dahlias.

More Place (spelt 'Moore Place' in the postal address on the bill), previously known as Le More and Aglonds More, a Grade II listed 15th century house, was bought by the lord of the manor of East Betchworth from the manor of Wonham in the 18th century. All subsequent occupants were tenants until the freehold was sold in 1981 following the death of the lord of the manor, Major General Goulburn.

The bill itself includes a note from Mr Mackay to Mr Hutchinson and is split into three sections - the first includes many fruit trees as well as various plants (such as clematis, roses and jasmine); a pruning knife; and shallots and garlic; the second section is entitled 'Garden Seeds' and includes vegetables, salad crops and tomatoes. A third section follows on and lists mixed crocus, ranunculus, tulips, tiqudia pavonia, jonquils (narcissus) and snowdrops. On the reverse there is also a numbered list of pear trees 'sent with'. The entire bill comes to £27 10s 5d and a later note on the reverse indicates that it was paid with a tip in 1828.

Surrey History Centre is fortunate enough to have received records of the following families that ran nurseries in Woking. The Cobbett family worked as nurserymen in Horsell for more than 100 years, Henry Cobbett having probably established the business in the 1820s. Nursery growing at Goldsworth Nurseries began in the 1760s north of Triggs Lane, where the Goldsworth Park housing estate is now, and was in the ownership of the Slocock family from the late 19th century until the 1970s. Knap Hill Nursery is thought to have been established by John Waterer in c.1760 and was owned by the family until 1976. The Jackman nurseries were founded by William Jackman in 1810 on 50 acres at St John's and sold by the family in 1967.

If this article has whetted your appetite for more about the history of the nursery gardens, why not look out for a future Marvel of the Month on the nurserymen of Woking?