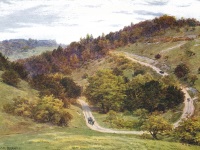 December is a month of celebration! Yes, it contains Christmas and New Year but, more importantly, December is the month which gave the world Jane Austen!

I was very excited to be able to attend the Jane Austen Festival for the first time earlier this year. The festival takes place in Bath, where Jane lived for several years after her father was forced to retire due to ill health. It also includes, for Janeites eager to walk in her footsteps, trips to Hampshire, where Jane spent her early life and where she returned after the death of her father.

So much so good for Somerset and Hampshire, but what about us Janeites in Surrey! What links can we find to the illustrious author in our county? 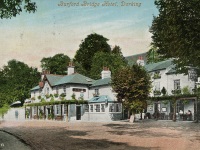 Jane's novel 'Emma' is set in Surrey and while Highbury was created by the author, many real locations in the county make an appearance. We are told, for example, that Mr Martin and Mr Knightley often travel to Kingston for business, Isabella is calmed to learn that there is no scarlet fever in Cobham, and Box Hill is the spot chosen for the disappointing picnic.

(On a side note, one of the key events in 'Emma' occurs when Jane Fairfax is anonymously gifted a Broadwood piano. Suspicions abound as to who the mysterious benefactor is, but if the citizens of Highbury had access to the Surrey History Centre archive, all could have been revealed! We hold the Broadwood archive (SHC ref 2185), which includes, in its vast collection, porters' and number books. These items list every piano sold or rented out by the company with the name of the purchaser. How excited the citizens of Highbury would have been to see the name of Jane Fairfax's secret admirer!) 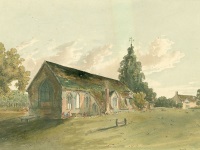 Jane's knowledge of the landscape of Surrey came from first-hand experience. Her godfather, the Rev. Samuel Cooke, was vicar of St Nicholas's church in Great Bookham in the early 1800s, and she and her sister Cassandra stayed in the village. Some people have suggested that Great Bookham, or perhaps nearby Leatherhead, may have been the inspiration for Highbury in 'Emma'. It is also widely accepted that Jane worked on 'Emma' while staying at the Burford Bridge Hotel at the base of Box Hill. 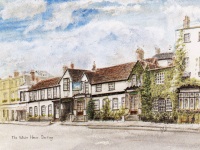 Jane's unfinished novel 'The Watsons' is also set in Surrey and here we can again see the area local to Great Bookham giving inspiration to the author. The book begins with Emma Watson being driven to the home of the Edwards in D[orking], where they attend a ball at the White Hart. Emma and her sisters, Elizabeth and Margaret, are described as living with their father in a small village just outside of Dorking. Readers have speculated that this village could in fact be Westhumble. Jane may very well have been aware of Westhumble as the home of an author she was fond of: Fanny Burney. The name of her novel 'Pride and Prejudice' is taken from the last sentence of Fanny Burney's 'Camilla'. Fanny's home in Westhumble, Camilla Lacey, was built using the profits from her successful career as a novelist; a circumstance that was surely coveted by Jane who spent the last years of her life living on the charity of her family. 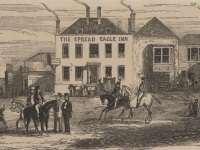 Links to Surrey are a little scarcer in Jane's other novels, but we do get a mention in 'Pride and Prejudice' when Lydia Bennett and Mr Wickham change from a coach to a hackney carriage in Epsom during their infamous elopement.

So, while Surrey may not traditionally get as much recognition as a site of Jane Austen history as some other places, the time she spent in our county was obviously greatly inspirational for her. And, in the end, I think that, and the presence that Surrey has in her works, gives us just as much right as Hampshire and Avon to claim Jane Austen as our own!