Before the redevelopment of Guildford Fire Station at Ladymead, Guildford, in 2012, a programme of archaeological work was requested by Surrey County Council's Heritage Conservation Team. This was as a result of information recorded on the Surrey Historic Environment Record that noted that 65 prehistoric worked flints had been collected from the area around the fire station by Ron Shettle, a former fireman, when he was based at the Station in the 1970s.

The archaeological investigations were carried out by a team from Oxford Archaeology and revealed a substantial scatter of worked flint, thought to date from the end of the last Ice Age - approximately 13,000 years ago. More than 5,500 pieces of flint - the remains of prehistoric tool-making activity - were recovered from an area measuring approximately 8 by 8 metres buried within sand deposits laid down on the edge of a former course of the River Wey. The flints were found in an exceptional state of preservation, despite the presence of an unexploded 76mm (3") Second World War mortar smoke round lodged in the midst of the scatter. 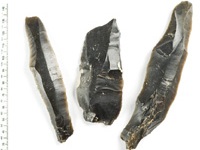 The site represents the remains of a campsite dating to the late Upper Palaeolithic period, with flints lying preserved (in-situ) where they fell while tools were being prepared and repaired by a group of hunter-gatherers. Previous research suggests groups such as these were likely to be following migrating animal herds - perhaps of wild horse or deer - along the Wey Valley and further afield, at a time when Britain was still joined to the European mainland. Initial research suggests that a variety of tool types are present for a range of activities such as hunting, butchery and the preparation and processing of animal hides. It is probable that other items were also left behind but these have not withstood the passage of time, so only the flints now remain.

Open air sites of this period, around the first re-colonisation of the British Isles following the last Ice Age, are exceptionally rare. The Guildford site is considered to be of national importance and detailed work to analyse the evidence recovered and publish the results will be ongoing over the next two years.

The Heritage Conservation Team provides archaeological advice to the county, district and borough councils, statutory undertakers, developers and their archaeological representatives, to ensure the implementation of the National Planning Policy Framework, other relevant legislation and county policies and guidance on archaeology and the historic environment, with the aim of achieving greater protection for Surrey's heritage and enhanced understanding and appreciation of its many assets and resources.

Surrey's Historic Environment Record (HER) is the comprehensive record of archaeological sites, finds and historic monuments for the county. Formerly known as the Sites and Monuments Record (SMR), it contains over 20 000 records, and new information is constantly being added. The HER contains records of sites and finds dating from early prehistory to buildings of 20th century date, from Scheduled Monuments to Listed Buildings. It contains a wide range of information on excavations and fieldwork, found objects and documentary sources.

The Service is currently based at Quadrant Court, 35 Guildford Road, Woking GU22 7QQ.