On 5 September 1538, Thomas Cromwell, Henry VIII's 'Vicegerent in Spirituals', ordered all parishes to keep a register recording all the baptisms, marriages and burials of the previous week. In 1598, it was ordered that 'great decent books of parchment' should be used for this purpose and that copies of new entries should be sent each month to the Bishop. For the Surrey parishes these 'Bishop's Transcripts' are held by the London Metropolitan Archives.

Initially, there was no standard way of recording the entries. As a result, in some registers, baptisms, marriages and burials were recorded on the same page for a particular year, while other ministers preferred to record the separate events in different sections of the book.

Despite the order that all baptisms, marriages and burials were to be recorded, some clergy ignored this and only entered the more important people in their parish. Among them was William Outhred, the vicar of Albury, who was too busy with his hobby – mathematics - to keep his registers up to date. He is credited with inventing the multiplication sign X. However the threat of losing his parish during the Civil War prompted him to record every ceremony.

By contrast, some clergy recorded more information than was required: for example, Mr Crayford who became the vicar of Dorking in 1612. These additional comments can throw light on the activities of the local community.

During the Commonwealth period 1653-1660 the registering of births, marriages and deaths (replacing baptisms, marriages and burials) was made the responsibility of the justices of the peace. At the Restoration in 1660, the original system was restored and it was ordered that the civil registers were deposited in the parish chest.

From 1666, the words 'buried in wool' or 'affidavit' often appear in the burial register. This relates to the attempt to revive the declining English woollen industry by enacting that bodies should be wrapped in a woollen shroud. Failure to do so could result in a fine of £5. Although the act was not repealed until 1863, by the 1770s the practice had fallen into disuse.

In 1754 Lord Hardwick's Marriage Act stated that a separate proforma marriage register should be used, but it was not until 1813 that separate baptism and burial registers were to be kept. With the introduction of civil registration in 1837 a new format for marriage registers was introduced which continues to this day.

Entry from Dorking, St Martin register (SHC ref DOM/1/1), recording John Rutland's suicide on 13 July 1622 and that he was buried in the ditch in the churchyard. Those who committed suicide, (also known as 'Felo de se' which is Latin for 'Felon of himself') were buried at the side of a road. This practice ceased in 1823 when suicide victims were allowed to be buried in consecrated ground, although it continued to be a criminal offence until 1961. 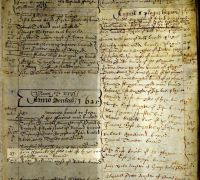 Parish registers can also record outbreaks of diseases, like this page from the same Dorking register showing the outbreak of plague.

Plague had recurred intermittently since the 14th century, and 1625 was one of the major outbreaks in England, with an estimated 35,417 dying in London alone.

This page also records the burial on the 23 April of John Sherlock, who had 'his feet cut off by his own father'.

The entry highlighted, for 17 December 1634, is for the burial of Frances Gascony, who died in childbirth. Unfortunately the baby was stillborn, so both were buried in the same grave.

Whether a woman was rich or poor, one of the dangers of pregnancy was that the birth would cause the death not only of the baby, but also of the mother. If she died up to a month after the birth then the mother was considered to have died in childbirth.

Out of about 1000 baptisms between 1620 and 1640, 49 are described as 'stillborn', five as 'unbaptised child', and 11 as 'infants', with three mothers being buried with their babies. 1636 had a particularly high mortality rate with 10 stillborn births and six infant deaths being recorded, whereas other years might have one or two.