An officer learns his trade 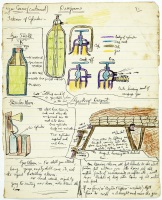 Eric Herbert Palmer of 184 Trinity Road, later 4 Wheatlands Road, Upper Tooting, was a scholar, aged exactly 18, when he signed his short service attestation form on 30 May 1916. His officer's file at The National Archives (ref WO 374/51979) provides a synopsis of his military career. Following training, he received a commission as a 2nd Lieutenant in the 9th Reserve Battalion, the London Regiment (Queen Victoria's), in March 1918, serving for 4 months under Col E J M Gore of Slyfield Manor, Cobham. He was then posted to the 4th Guards Brigade in France, serving with them throughout August 1918, before transferring on 1 September 1918 to the 12th London Regiment (Rangers), as the allies' advance to victory gathered momentum. Eric's active service was short: on 11 September 1918 at Épéhy, the effects of a phosgene gas shell necessitated 10 days treatment at a Casualty Clearing Station before he was sent home via Boulogne. He never returned and was demobilised on 19 December 1918. 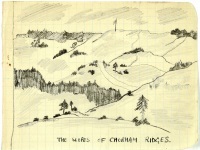 Recently, with the help of Surrey History Trust, we acquired Eric's meticulous military training notes while at Blackdown Signalling School and Keble College, Oxford (SHC ref 9734/1-3). The fascinating notes, compiled between 1917 and 1918, with their slightly juvenile handwriting and extensive use of coloured crayons, reveal a young man barely out of school learning the basics of warfare as it had developed over three long and terrible years. They cover such subjects as trench, open and shell hole warfare; the art of trench and dugout construction; bombing and the co-operation of infantry units with artillery and aircraft; weapons training; gas and anti-gas measures; and signalling; map reading, field sketching and topography. The notes show how equipment and tactics had changed over the course of the war, as lessons were learnt and technology advanced. For example, the static lines of trenches so associated with the First World War had given way on parts of the front with something more makeshift. Eric writes "Trench Warfare ceased, for the time, in 1917, and Shell Hole Warfare began. Most principles of Trench Warfare apply, but no line is maintained. Isolated posts, or platoons in positions such as that shown, form a rough line, but gaps are everywhere. Wire is no longer put up in continuous belts".

Most extraordinary is a large, highly coloured plan of Deepcut and Blackdown Camps and Barracks in Frimley and Chobham, drawn on the blank side of 35 War Savings Association postcards, which have been stuck together with brown tape. It seems unlikely this was part of a formal training exercise; more likely, Eric decided to while away the hours and practise his newly acquired map-making skills by undertaking this ambitious project. The plan shows how far the landscape of north west Surrey had been changed by the war, sprouting a network of extensive military camps, with barracks, parade grounds, shooting ranges, stable, recreation huts and football fields, linked by new roads and railways. The location of the various units of the London Regiment is carefully indicated, the 9th Battalion occupying North Minden Barracks in Deepcut Camp.

Eric's service may have been brief but he had earned his place in the 'Triumphal March of the London Troops', through Westminster and the City of London on 5 July 1919; the official programme is the last item inserted in the file of notes.