An anniversary for the Manorial Documents Register 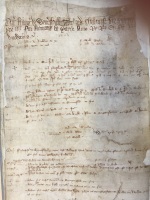 This year we celebrate the centenary of the first of the Law of Property Acts (1922-1924) which brought an end to the manorial system of 'copyhold' tenancies, and provided unique legal protection for the surviving records of manors. After centuries of currency as legal evidence, thousands of court rolls, thick, furling clusters of clumsily stitched parchment strips, along with books and other records were required by law to be detailed on the Manorial Documents Register. While many documents were recorded on the Register as privately owned (and many remain so to this day), others became the core of local archive collections, helping to inspire the creation of the earliest county record offices.

Manors originated from ancient landholdings which accumulated various rights and jurisdictions over the people who lived their lives there. Record-keeping by manorial officials was systematic from the medieval period onwards, modelled on the management practices of large monastic estates such as those of Chertsey Abbey. Surrey court records survive from as early as 1278 (manor of Farleigh), detailing the tenants' titles, obligations and rights, the use of common land, the administration of the community and the enforcement of the law at local level. 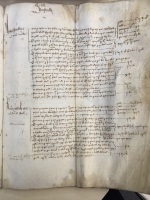 A couple of our oldest manorial documents feature here.

The court roll of the manor of Wintershall (SHC ref G47/1-6), in the environs of Bramley, begins in March 1319 ('the Tuesday next before the feast of the annunciation of the Blessed Mary, in the year of the reign of King Edward, son of Edward'). Six membranes have been unbound, flattened, and repaired with new parchment. The piratical-looking stitched tears are historic. In abbreviated Latin, the initial paragraphs include fines for those brewing ale, recorded over the name of each (in practice this was akin to a licence): William de Burtligh (Birtley), John le Brokere, John Philpot of Hascombe, William son of Henry le Muleward and Robert le Chaloner. In addition, Christine le Bikener kept a 'cappelbothe contume' - presumably a rowdy booth or drink stall - and was fined for this, more than once. (Brewing was a common occupation for women, and some kept ale houses, such as the establishment of Eleanor Rummyng of Leatherhead, poorly reviewed by the satirical poet John Skelton in 'The Tunning of Eleanor Rummynge' - she was fined at court for selling at an excessive price in 1525.) 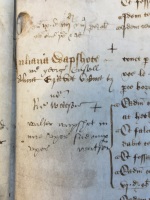 While the court roll is the master record, the steward of the manor also kept careful track of the tenants' monetary dues and the 'works' they owed. The rental and custumal of the manor of Pyrford (SHC ref G97/4/9) compiled in 1474 includes memoranda of tenants' days of labour on all stages of the sowing, maintenance and harvest of the lord's land, dating back to 1330 (even earlier records for Pyrford in fact survive, from 1283). The tenants of Horsell ('Horshull') include Robert Walden and Juliana Wapshote (Wapshott), whose surnames are familiar as local place names today. The parchment book, beautifully written though now rather stained, has been added to over time: details of Juliana holding land in Woodham (Fremansland lying next to 'Durnford causeway') have been amended during perhaps 75 years, to judge by the changing styles of handwriting, to Alice Gravet, widow, now Richard Watson, Walter Wapshott by right of his wife, late the wife of Watson, and now George Gastell, in a succession of 16th century hands. 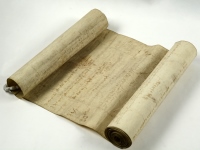 As well as court rolls and rentals, there may be account rolls of the lord's farming and income from the manor (such as James Berners for West Horsley in 1378, SHC ref G70/2/2), valuation surveys and extents describing boundaries and features. These local records are among the best evidence for Surrey in the Middle Ages. Historians of the county have long worked on these sources, and for some produced transcripts and editions, but there remains much to uncover within them about the more distant past of our surroundings. (For the online overview of surviving records, visit the Manorial Documents Register)