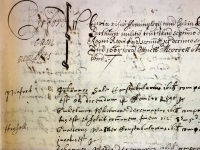 What are manorial records?

In a county like Surrey, with few large towns until relatively recent times, many inhabitants would have been tenants of a manor, in which case manorial records will often provide valuable information about their lives and landholdings.

A manor was an estate with a court (called a court baron) through which the descent of property within the manor and the use of the common fields and pastures were regulated. Some lords of manors had, in addition, been granted the right to hold a further court to deal with minor misdemeanours and breaches of the peace (the court leet).

If a tenant was a copyholder of the manor any sale of his property or the succession of his heir would have to be conducted through the court baron and would be subject to a payment to the lord of the manor. Thus the court rolls, rentals and surveys of a manor are a rich source for family historians and can be particularly useful for the medieval period, before the introduction of parish registers (although, beware, they are generally in Latin until 1733). Manorial records can also throw light on the lives and concerns of the large proportion of the population who struggled to draw a living from the land, through their description of the customs of the manor in the regulation of the use of land, the pasturing of animals, and the tackling of nuisances.

However, manors changed hands frequently and wealthy landowners, both private families and institutions such as monasteries and university colleges, might accumulate manors in several counties. Many manors would at some point have been in the possession of the greatest landowner of all, the Crown. At a result, the records of a manor may well be scattered among several record offices including the National Archives, county record offices, college and cathedral archives and private muniment rooms.

The Manorial Documents Register, at the National Archives, is a record of the location of all known surviving manorial records. Most of England and Wales is now covered by the online index, which is searchable by manor name and parish.

The manor of Pyrford comprised various lands in the parishes of Pyrford, Horsell and Chertsey (Woodham). This index (below) records tenants and freeholders who appear in the court record, 1654-1675 (SHC G97/4/2). The court generally met once or twice a year (sometimes it did not meet at all, for example between 1666 and 1670). Court business included the naming of officers such as the constable, appearance of the jurymen and their presentments of offences to the view of frankpledge, appearance of the homage of the court baron (tenants of the manor), sale or inheritance of manorial copyhold land. A detailed summary of the court business in which the indexed names are recorded is also available at Surrey History Centre.

Useful introductory guides to manorial records include the following books: