Harold Brown was born on 23 May 1899 at 49 Oban Street, Poplar (East India Docks), to John Benjamin Brown, a West Indian seaman, and his wife Elizabeth Emma (née Cross), a white Londoner. Twelve years on, the 1911 census records him as a schoolboy in Canning Town at 4 Watford Road, Tidal Basin, Victoria Docks, living with his mother, sister Ada, five year-old brother Gordon, and a boarder, Joseph Reid, who was a Jamaican seaman.

About 60% of First World War soldiers' service records were irretrievably damaged or lost as a result of enemy bombing in 1940, and Harold's papers have not survived. Nor have the enlistment registers for the eastern recruiting grounds of the Queen's Royal West Surreys (QRWS), but we do know that Harold enlisted at Canning Town, was given a general army number G/24948, and served initially with the 3/4th Battalion QRWS up to 1917.

The 3/4th QRWS, officially formed in April 1915, was a territorial battalion, initially engaged in home service and training. From October 1915 to July 1916, the battalion was billeted in Reigate, from where its members were sent on training marches to Godstone and musketry instruction at Rye, East Sussex. In April 1916, drafts of men from the Oxfordshire and Buckinghamshire Light Infantry brought the Battalion up to full strength of 1,200 men and, in August, 300 men were sent overseas to join the London Regiment. It was not until May 1917 that the remainder of the 3/4th sailed from Southampton to France where the battalion was attached to the 21st Division. In July it fought at Arras and, by September, it had moved to Zillebeke Lake near Ypres. On 2 October, the men joined the 8th Battalion, the Leicestershire Regiment, in the front line, just east of Polygon Wood, where Harold earned his first Certificate of Gallantry. The conditions were dreadful: the war diary reports that "this ground had been churned by the continuous shelling to an almost impenetrable morass"; the whole area was also covered with barbed wire and concrete block houses manned with machine guns. 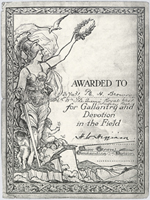 After fierce fighting, the 3/4th helped capture a German concrete fortress occupied by soldiers recently arrived from the Eastern Front. Losses were high: three officers and 61 men were killed, 17 officers and 241 men were wounded, and 21 men were missing – over one third of the battalion. Among a number of awards for conspicuous gallantry, Harold Brown received a Divisional Commander's Card of Honour for having "set a fine example of physical endurance carrying on throughout the whole of October 4th although severely wounded at the outset". The card, from 21st Division HQ, reads "Your Commanding Officer and Brigade Commander have informed me that you distinguished yourself in the Field between the 2nd and 7th October 1917. I congratulate you on your fine work".

On 8 November 1917 Harold was reported wounded along with a number of Queen's men. He was not sent home for hospital treatment, and the 3/4th remained in the area, their strength a little over 600 men. Christmas was spent at Heudicourt and, in January 1918, the unit moved north of Peronne. By mid-February the 3/4th was disbanded and the men posted to other battalions, Harold joining the 1/6th Battalion QRWS which was attached to the 12th Division. At some point he was assigned a new number, 207431.

A small collection of material relating to Harold is held at the Imperial War Museum and he featured in their 2008 exhibition 'From War to Windrush'. His papers include a second Divisional Certificate of Gallantry signed by Sir Henry Rawlinson (General Officer Commanding, Fourth Army), along with Army Orders issued from the Fourth Army Headquarters awarding him the Military Medal, in December 1919. Unfortunately no other reference to Harold can be found in the regimental archives at Surrey History Centre. Like many servicemen, Harold was not demobbed until April 1919. He went on to work as a seaman and a docker at the Royal Albert Docks in the East End of London until his death in 1955.