In 2012, Surrey History Centre was fortunate to receive two beautiful albums of watercolours and drawings of churches and chapels across the whole of the ancient county of Surrey (SHC ref 9043). The illustrations were produced mostly in the mid 19th century, before restoration changed the character of many of the buildings depicted. They are also a valuable point of reference for many of the 'lost' churches that have since become redundant or replaced by newer buildings, or that were damaged or demolished during the Second World War.

The albums came to us from Guildford Museum where they were deposited by Guildford Diocese back in 1957, but their date and coverage suggest that perhaps they were compiled for the Archdeacon of Surrey or Bishop of Winchester at a time when the whole of Surrey lay within the Diocese of Winchester. Accordingly, the albums also include churches in parishes such as Camberwell, Lambeth and Southwark, which are now in Inner London Boroughs. For those parishes in the current administrative county of Surrey, large towns and small villages are afforded equal coverage. 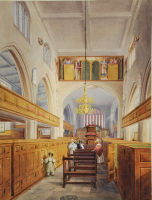 The two volumes are arranged in (approximate) alphabetical order and contain a selection of illustrations (watercolours and other media, ranging in size and quality), floor plans and some photographs of parish churches and related buildings. Many of the illustrations date from the 1830s, but there are later additions, including some photographs. Some entries are signed and dated (there are several by Henry Prosser, WH Kearney and BB Wadham), others are simply initialled, but a sizeable number are anonymous, undated and often uncaptioned. This presented us with a real cataloguing challenge, but with the help of Southwark and Lambeth Local Studies, the expertise of colleagues, and church guides such as Pevsner and Cracklow, we have succeeded in identifying all but three of the buildings!

The illustrations have now all been scanned and thumbnails images have been added to the catalogue descriptions on our online catalogue, and can also be viewed on our Exploring Surreys Past website.