The Royal Philanthropic School at Redhill 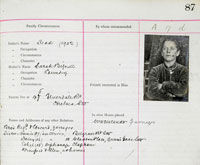 Founded in London in 1788, the Philanthropic Society was established by a group of gentlemen, worried by the large number of homeless children in the city who could earn their living only through begging or crime. The Society began its work in October 1788, placing one child out to nurse, and by 1792 were maintaining several 'families' of children, cared for and trained by craftsmen and their wives, in rented houses. In that year the first central institution of the Society was opened at St George's Fields in Southwark. It was intended for the sons and daughters of convicts, and boys and girls who had themselves been convicted of crime. In 1802 a separate 'Reform' was opened for the criminal boys and the main institution was afterwards known as the 'Manufactory', since the boys were principally engaged in the manufacture of clothes, shoes, rope and other items. The Female Reform, although on the same site, was completely segregated. The Society was incorporated by Act of Parliament in 1806 (46 Geo.III c.144). The school moved to Redhill in 1849.

The Registers of Admissions are particularly interesting since they give wonderfully detailed accounts of the boys and girls admitted to the institution including, in some cases, photographs. The information given in the early registers is generally: name of boy; age; circumstances before admission; trade followed, with notes on apprenticeship, behaviour, discharge and later news. Up to World War II the school encouraged as many as possible of its boys to emigrate, rather than face unemployment and the consequent temptation to relapse into crime. At first most were sent to Australia, but later the majority went to Canada and some to South Africa, because the passage was cheaper.

The records for the Royal Philanthropic School have long been a source of interest to both social and family historians. Over the past 10 years or so, with more resources (particularly the census) being available on-line, we have had more and more enquiries relating to this collection, including many from Canadian and Australian family historians who have found evidence that their forebears were once inmates of this institution.

We welcome visitors who wish to consult the records. We are also happy to provide digital copies of individual entries from the Registers of Admission (see Digitisation of archive and library material for application forms and charges). More recent registers are subject to certain access restrictions; please contact us if you are interested in gaining access to information contained in these registers.

In the spring of 2009 a project was begun to index the Registers of Admissions from 1788 up to 1906, and the project was finally completed by volunteer Mike Couper in December 2009. Whilst it is not possible to put all the information about each inmate in the index, we hope that there is enough information to ensure that anyone trying to trace an ancestor can be sure that they have found the correct person.

Whilst every effort has been made to ensure that these transcriptions are correct, if any errors are found please do contact Surrey History Centre and we will make any appropriate corrections.