More about the Loseley Letters database

The correspondence of the More, (later More Molyneux), family of Loseley House is one of richest surviving sources for Tudor and Stuart Surrey. This database includes descriptions of the great majority of surviving letters written between circa 1506 and 1689, that is from the time of the founder of the family's fortune, Sir Christopher More (died 1549) to the death of Robert More. The most significant portions of the correspondence are those from the time of Sir William More (1520 to 1600) and his son Sir George More (1553 to1632), both of whom held many important local and national offices, but some of the later letters are also of great interest, for example throwing light on the experiences of south-west Surrey during the Civil War. 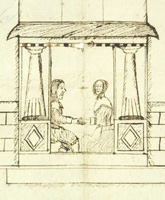 Alongside successive monarchs, bishops of Winchester and the leading gentry of Surrey (such as Carew, Howard, Slyfield, Browne, Weston, Bray and Stoughton) and neighbouring counties, correspondents include such luminaries of the Tudor state as William Cecil (1520 to 1598), Lord Burghley, Robert Dudley (1532 to 1588), Earl of Leicester, Charles Howard (circa 1536 to 1624), Earl of Nottingham, Sir Francis Walsingham (1530 to 1590), Edward Clinton (died 1585), Earl of Lincoln and Anthony Browne (circa 1528 to 1592), Viscount Montague.

The original letters are held in 13 volumes (reference 6729) and in several series of files of loose letters (reference LMCOR). Because the selection of letters for binding (which took place in the early 19th century) was somewhat arbitrary, letters relating to the same subject are often split between a number of the volumes and some of the files, making the correspondence difficult to follow. This database permits descriptions of the correspondence to be sorted chronologically, by author or recipient, by the office to which it relates, by subject or by place, thus allowing letters which are physically divided to be reunited. Free text searching allows every description to be scanned for an individual word or name.

Users of this database should always bear in mind that the bulk of the surviving Loseley manuscripts are not held in the two correspondence series. Most, including further documents relating to the subjects covered by the letters, is held under the reference LM. Some manuscripts were sold in the last century to the Folger Shakespeare Library in Washington DC. Microfilm copies are held at Surrey History Centre under the reference Z407. All letters described in the database have been transcribed (see Zg/109).