"Thou shalt not suffer a witch to live"

In 1484 Pope Innocent VIII denounced witchcraft as a heresy, although it would not be until 1542 that it became a capital offence in Britain to practise witchcraft. This Act was repealed five years later. In 1562 a new Witchcraft Act was passed, which stated that the death sentence was only to be used for those who had caused harm to an individual; lesser offences using witchcraft were punishable by imprisonment.

An Act of 1604 also made it a capital offence to invoke evil spirits or commune with familiar spirits. These 'familiars' were said to inhabit the body of animals, so in extreme cases, having a pet could condemn you as a witch. Both the 1562 and 1604 Acts transferred the trial of witches from the Church to the ordinary courts and those who were found guilty were usually hanged, unlike in the rest of Europe where witches were usually burnt at the stake.

Allegations of witchcraft could be prompted by a run of bad luck to an individual or community, such as the death of a person or cattle. During the reign of Elizabeth I about 30 'witches' were tried at the Surrey Assizes. These included Eden Worsley, a spinster of Ewell, who was charged that on 4 July 1564 she murdered by witchcraft Elizabeth, the daughter of Robert Bybye. She was the only one sentenced to hang; the majority were found not guilty.

Despite James I's interest in witchcraft, just one case was brought before the Surrey Assizes in his reign, the outcome of which is unknown. There were probably others brought before the lesser court of Quarter Sessions, but the records for this period have not survived.

In 1736, Parliament passed an Act repealing the laws against witchcraft, but imposing fines or imprisonment on people who claimed to be able to use magical powers. This Act was repealed in 1951 by the Fraudulent Mediums Act, which in turn was repealed in 2008.

The Godalming parish register showing the burial of Richard Charman on 5 August 1583. Agnes Stevens of Godalming was charged with his murder by witchcraft on 12 July 1585 at the Assizes. The charge states that on 21 June 1583 she bewitched him so that he lingered until 20 July and then he died. Another one of her victims Catherine Hamond is also mentioned in the register. Stevens was found guilty and remanded after sentence. The burial of her third victim, six year old Margaret Roker, is not recorded. (SHC ref GOD/1/1) This was not the first time she had been tried for witchcraft. On 26 July 1582 she was charged with bewitching cattle belonging to Robert Bocher and Thomas Allen; although she pleaded guilty she was pardoned. Three other witches, Elizabeth and Joan Coxe and Juliana Payge, all from Godalming were also tried at the same session, but found not guilty.

Articles of misdemeanour against Richard Luckins, keeper of the Sussex county gaol at Horsham. Among his crimes he is accused of allowing prisoners to escape and attempting to recover them through the services of witches and also of siding with the King's army when it entered Sussex etc (SHC ref LM/769/1), nd [c.1646]. 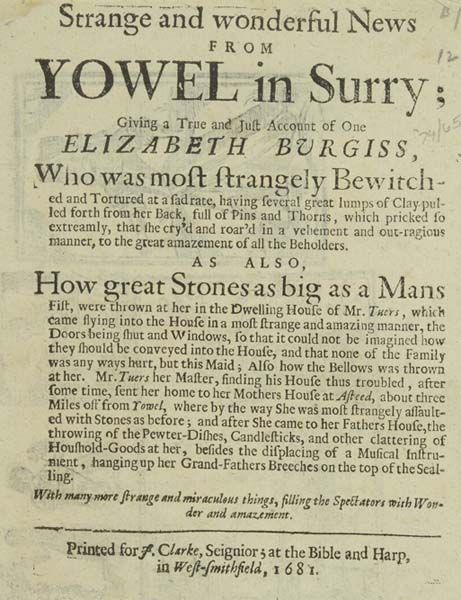 During the 17th Century newspapers were sometimes published on witches. Here Joan Butts is suspected of 'bewitching' Elizabeth Burgis of Ewell, after she refused to give her an old pair of gloves and sent her away with some unkind words. Butts later returned and asked for a pin which Burgis gave her and 14 days later a storm blew up and a stone hit her in the back, which caused her to be confined to bed with 'pricking pains' in her back. Butts was the obvious suspect for this unnatural event since she was described as a person of 'ill repute' and 'for a long time suspected to be a witch'. (SHC ref 942.2 EWE) 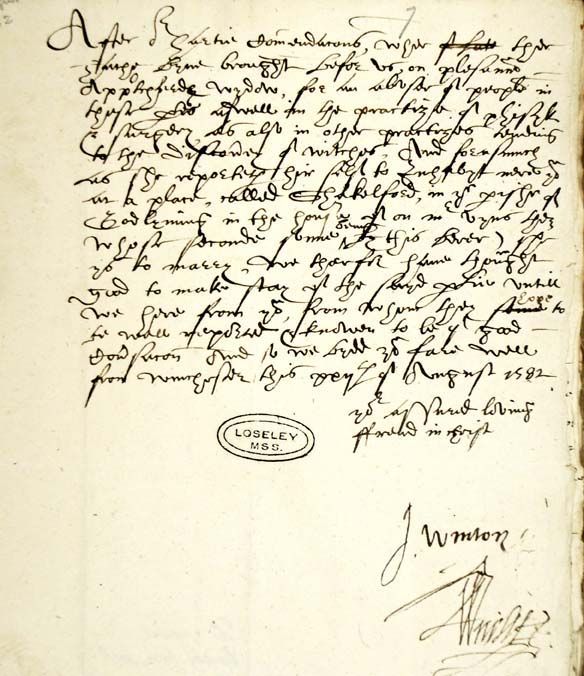 Letter from John Watson, Bishop of Winchester, to Sir William More, dated 22 August 1582, requesting that he looks into the character of [?Plesannor] Applchardes, widow, of Shackleford, Godalming, who had been charged with being 'an abuser of people in the practice of physic and surgery as also in other practices tending to the discovery of witches'. The outcome of the case is unknown. (SHC ref 6729/9/7)