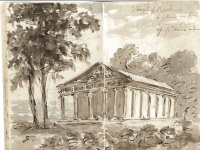 This small sketchbook provides a snapshot of Painshill Park as it appeared in August 1772 (SHC ref 6701/1). Many of the features and views depicted in the sketches will still be recognisable by visitors to Painshill today.

The sketchbook belonged to the Reverend William Gilpin (1724-1804). Gilpin was one of the earliest promoters of the aesthetic movement that was to become known as the Picturesque in the latter part of the eighteenth century. Born in Cumbria, Gilpin studied at Oxford in the 1740s, before working as a schoolmaster and subsequently head teacher at Cheam School from 1752 until 1777. 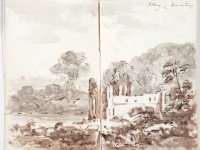 In the 1760s Gilpin began to visit areas of the country known for their scenery, frequently recording what he saw in sketches and later on as written accounts of his tours. Gilpin is known to have visited Painshill Park for the first time in May 1765, as his account of this visit survives in a notebook held by the Bodleian Library, Oxford. The garden at Painshill was created by the Hon Charles Hamilton between 1738 and 1773 and was one of the first gardens to demonstrate the changing tastes of the time, moving away from a formal geometric layout to a much more naturalistic style. Painshill became famous during Hamilton's lifetime and so Gilpin would have been aware of it and inspired to make the short journey there from Cheam.

The Painshill sketchbook dates from Gilpin's second visit there on 14 August 1772 and includes a rough map and nine sketches of views in the garden, as well brief notes. Features such as the ruined abbey, hermitage, grotto, mausoleum (Roman arch), the tower and the temple of Bacchus are depicted, as is the view from the Gothic temple. In 'William Gilpin at Painshill' (1994), the author Michael Symes states that Gilpin's sketches were created in a two-step process, the main features being marked out in pencil and chalk during his visit and then worked up soon afterwards using pen with the addition of either a brown or grey wash as seen in the Painshill sketches. This process is described in a letter written by Gilpin to his friend William Mason in April 1772, just a few months before his visit to Painshill. 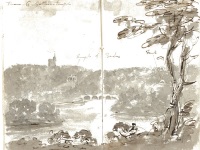 Although Gilpin devoted a sketchbook to his visit to Painshill in 1772, his written notes demonstrate that he was also able to look on it with a critical eye, for example, with regard to several of the structures in the garden. He notes 'Gothic temple bad' but that it has a 'rich view from it' as shown in one of the sketches. Gilpin approves of the tower and the temple of Bacchus which 'stands bold' but describes the grotto as 'entrance bad, and the stone too much detached, and in unnatural shapes'. Despite his criticism of the grotto, he drew two sketches of it.

Gilpin spent the final part of his life as vicar of Boldre in Hampshire, from 1777 until his death in 1804, and it was during this time that accounts of his tours and his theories about scenery were published. A revival of interest in Gilpin's writings occurred in the latter part of the twentieth century, in particular among garden historians. Painshill had fallen into decay in the post war period, but members of the Garden History Society began to collate research in order to make a case for its preservation. An article in the journal Garden History (Autumn 1973) included photographs of Gilpin's Painshill sketchbook which helped to encourage interest in the garden. 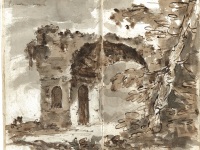 In 1981, the Painshill Park Trust was founded with the aim of restoring the landscape garden as close as possible to Hamilton's original concept. Visual sources such as Gilpin's sketchbook have played an important part in the research conducted by the Trust who in 1983 began the restoration of Painshill which continues today. Surrey History Centre holds the Trust's archives (SHC ref PPT) which include copies and transcripts of sources relating to Painshill, including Gilpin's first visit there in 1765.