White and Sons of Dorking: 80 years of auction records 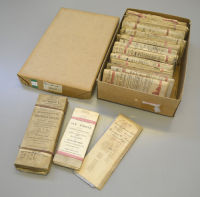 This fascinating collection is in the process of being conserved and catalogued by volunteer Penny James, and made available to readers as the cataloguing proceeds. It comprises sale and auction particulars produced from 1818 to 1900 in the course of the business of Messrs White and Sons, surveyors, auctioneers and estate agents of Dorking. The hitherto uncatalogued records were deposited with us between 1963 and 1969!

White and Sons was founded in 1817 by James White, auctioneer and property agent, and the firm operated from premises in High Street, Dorking. It is still in existence; in fact in 2011 the firm was awarded two silver medals in the Sunday Times/Times Estate Agent of the Year awards.

When deposited, K99/2 consisted of 147 boxes containing, on average, 19 'bundles' of documents. Each bundle is made up of several documents relating one sale or auction, and may include catalogues, posting bills, correspondence, plans and maps, receipts, auctioneer's accounts and sometimes agreements signed by purchasers. Each bundle, unopened since it was created in all likelihood, is tightly folded, tied with ribbon and very dirty. Some have been quite badly affected by damp storage conditions in the past, and consequently several of the individual items within them have proved to be too fragile to handle.

Each bundle has to be untied and the pieces within unfolded and cleaned. They are then put into an acid-free file and placed under weights to flatten them. Several of these files, depending upon bulkiness, are put into a file folder. Up to four of these folders can then be placed in an archive box ready for the shelves of the storage room. During the unfolding process, certain key pieces of information are captured and subsequently entered on the online catalogue as finding aids.

There is a wealth of historical information contained within this series, especially for those interested in records of land and property ownership (and changes to them) in Dorking and the surrounding parishes, tenancies and social history. It might even be possible to trace the history of an old piano, clock, agricultural implement, art or library collection as these are all itemised in sales of household furniture and effects and farm live and dead stock sales. For instance, there is a record of an early steam traction engine (tractor!) by Ransome and Sims complete with linkage and implements in a farm sale of October 1875 by the executors of the late Mr William Fish of Brickhouse Farm, Charlwood (K99/2/2157/1-23). In October 1868, in a sale of the household furniture and effects of the late Miss Beardmore of Juniper Hall, Mickleham (K99/2/1811/1-85), there is listed a supposed 1719 Cremona violin by Antonius Stradiuarius (sic). Sadly this proved not to be genuine.