What did the Normans do for us? 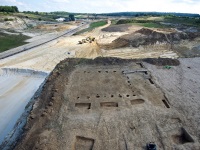 A million struck flints from the Stone Age, complete 3000 year old pots, and rabbit warrens and vermin traps from the medieval period - all these and more were revealed by archaeologists in the North Park Farm quarry in Bletchingley, as a new book (Marples, N, & Poulton, R, 2019 Prehistoric and early medieval landscapes at North Park Farm, Bletchingley, SpoilHeap Publications Monograph 21) explains.

The most unexpected discovery was, however, the evidence for transformation of open pasture into an economically productive landscape in the early Norman period. A carefully surveyed system of fields and trackways was laid out across a large area. The trackways allowed stock to be easily moved around the fields, some of which were used for crops. There was a regular provision of substantial barns, while settlements of various sizes allowed people to be close to their work. 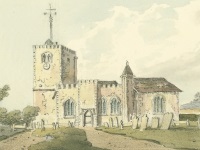 More surprising still was the integration of farming with substantial industry. Charcoal burning exploited the substantial woodland resources on the gault clay and chalk downs just to the north. Much of its product must have been used in the ironworking site that was also identified.

These improvements can be fitted into a broader context in two ways. Locally, the Norman conquest led to a new lord of the manor of Bletchingley. This was Richard of Tonbridge (of the de Clare family) and he soon began to develop his estate. His first concern was security, for which a castle was necessary, but this was swiftly followed by a church. Parts of both of these still survive in Bletchingley village, but this is the first evidence of his wider economic ambitions. More generally, such developments are part of a wider change in which the open pastures and woods of the Weald and greensand were turned into an organised farming landscape. 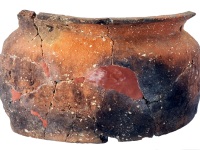 Memories of war and conquest were fading by the late 12th century, and leisure, especially through hunting, became the focus of social aspirations. The small settlements were abandoned and the field ditches were filled to allow deer to graze unimpeded in the new North Park. The de Clares owned vast estates in addition to Bletchingley and could afford to lose these economically productive lands.

Other major changes were occurring at the same time. A planned town, its main street and wide market place still clearly visible today, replaced the little hamlet at Bletchingley. The nearby gloomy castle was deserted for life in the country at a new manor house, Bletchingley Place, on the edge of the deer park.

'Medieval' has increasingly become a term of abuse, denoting a conservative and backward outlook: the 200 years from 1050 to 1250 were anything but for those who lived through them.