The men behind the making of a map 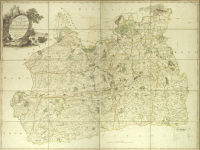 This map of Surrey published in 1793 (SHC ref M/808) was the sixth and last complete survey of the county before the advent of the Ordnance Survey and national government-funded surveying. It was the culmination of many years' work and the product of the most up-to-date scientific thinking of its day. It is also one of the few maps where the maker left a comprehensive record of its creation from which we can learn about those involved in its making.

Joseph Lindley was born in 1756 near Wakefield, the son of a local architect. He was sent to London to work in banking, but by 1781 he was employed at the Time Department at Greenwich where he rapidly rose to become Head of the Department. His work also involved the recording of thousands of observations made by Sir Nevil Maskelyne, the Astronomer Royal, who in 1772 perfected the method of transit-observation. Lindley's careful and accurate work and his knowledge of longitude resulted in his being sent to Paris in 1786 to take chronometer readings to help in the triangulation between Paris and London supervised by William Roy.

William Roy (1726-1790) was a Scottish surveyor, military draughtsman and amateur antiquary. During the Jacobite rebellion and subsequent Highland clearances, the army and the engineers of the Board of Ordnance had commenced a program of surveying of Scotland on a large scale of 1" to 1000 yards (1747-1755). By 1765, Roy was deputy quartermaster general to the forces and engineer-director of military surveys in Great Britain. His measurement of the Hounslow Heath baseline in 1784 was the basis of the London-Paris triangulation that was to be the foundation of the modern Ordnance Survey. 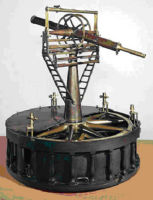 On Lindley's return from Paris, he decided to undertake a county survey of Surrey and, fortunately for us, he kept careful records of his surveying and published their details in a Memoir (SHC ref 526.8) in 1793. He purchased the equipment he required: a chronometer and a theodolite. The chronometer was developed by John Arnold (1736-1799), a clock maker who had submitted timepieces to the Longitude Act competition and invented the first pocket chronometer. The theodolite was a smaller version of the one created by Jesse Ramsden, a Yorkshireman, born 1735, for William Roy for his London-Paris triangulation. This instrument for Roy took three years to build and had a base circle of 3 feet; known as the Great Theodolite it weighed 90 kilograms, and is now in the collection of the Science Museum. This theodolite was used by the Ordnance Survey to carry out the project known as the Principal Triangulation of Britain which took place from 1783 to about 1853. 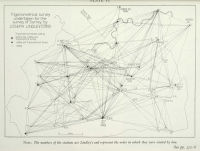 Lindley sought the permission of General Roy to use his measurements from his triangulation with the Ramsden theodolite of the south east of England, in particular 5 stations in Surrey itself, and he 'in a very obliging manner' prior to their publication, gave the positions of the five places which were to serve as primary stations in the survey. Lindley was wholly responsible for undertaking the full trigonometrical survey, a first for Surrey. He started by marking these points on paper at scale of 2" to 1 mile and then systematically and carefully surveyed the county for 'stations' or high points, 85 in all, and proceeded with the triangulation being at great pains to test their accuracy against Roy's readings. Every 'station' is recorded faithfully in the published memoir.

Lindley then went into partnership with William Crosley who had trained as an Estate Surveyor and later undertook canal surveys at Rochdale, Lancaster and Scarborough before becoming resident engineer at Rochdale Canal in 1794. On the Surrey survey he was assisted by a local land surveyor, Richard Crabtree of Farnham, who went on to set up a successful practice in Sussex. Crosley and Crabtree undertook the bulk of the topographical survey and employed far more traditional methods, preferring to use a plane table and two surveying wheels to conduct a fairly standard traverse along the roads.

The survey was completed in 1790, and Lindley tackled the problem of the orthography or use of standard names by sending proofs to the Rev Owen Manning, rector of Godalming, Mr Barnes of Reigate for the names of the eastern side of the county, and William Bray the antiquarian who corrected the names of farms and pointed out' several omissions of names of moment'. By these conventional stages the proofs reached Benjamin Baker, the Islington engraver, one of the most respected of his day and the map was published in 1793.

William Crosley died in 1797 and Lindley, having incurred considerable financial losses with the project, sold on the plates and maps to a Netlam Giles for £64 in 1799, and until his death in 1808 took no further interest in surveying. William Faden bought the plates sometime before 1814 and reissued the map as a second edition in 1814 and again with revisions in 1819. On his death his business was taken over by his son-in-law James Wyld who re-issued the map again in 1874, but not before removing the names of Lindley and Crosley!