The Lost Manor of Preston Hawe 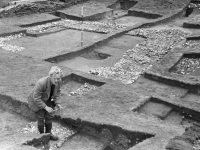 In the early 1950s Brian Hope-Taylor was employed by the Ministry of Public Buildings and Works to explore a well-preserved medieval site in advance of housing development at Preston Hawe in Banstead. Subsequently he become one of the best known archaeologists in Britain but he never found the time and means to prepare a report on his discoveries here. In 2008 a local group of volunteers, assisted by the Surrey County Archaeological Unit, started to piece together the 1950s archive to try to make sense of it. The work is now well advanced, which has enabled an interpretation board to be erected on site and a final report is in preparation. 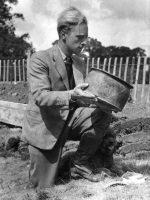 The site was established by the later 12th century and flourished well into the 13th century, but was deserted by the early 14th century. Oddly, this is the period of the earliest known reference to a manor of Preston, in 1316-17, when it was in the possession of John de Chetwode, although a Ralph de Chetwode is recorded in the area a century earlier. 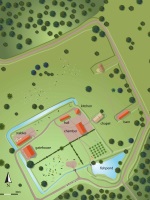 The reconstruction plan shows the principal site was enclosed by a bank and deep ditch. Inside was the residence (chamber) of the Lord of the Manor, a communal hall for his followers, and a kitchen to feed them all. This is a classic early 13th century arrangement of a hall and chamber complex set within a rectilinear enclosure. The wealth of the manor was probably built upon the cattle trade, and the southern part of the enclosure was where they were kept before being driven to the market in Croydon. A chapel lay outside the enclosure and burials were found both inside and outside the building. One person was found with a pewter chalice, indicating that he had been a priest. The chapel probably began earlier than the enclosure, by the late 12th century, although the location of contemporary domestic accommodation is unclear. Its existence links back to the name Preston, which means 'farm of the priests'. 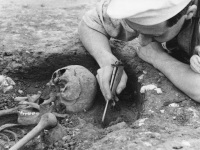 Learn more about the work of Surrey County Archaeological Unit.